Hollywood star John Krasinski has struck a deal with ViacomCBS to license his popular digital series Some Good News.

As per the deal, the series format and short-form content will appear across a number of Viacom and CBS properties, reported Variety.

The show, which Krasinski hosted on YouTube, is "dedicated entirely to good news".

The actor shot the series from his home where he was locked up with his family due to the COVID-19 pandemic. The series, consisting of eight episodes, debuted on 29 March and has amassed 2.6 million subscribers to the channel till date.

While Krasinski will continue to be involved as an executive producer, he will not host the new episodes.

Wow who can believe when we started this thing together we all just wanted good news to be more fully represented in our everyday lives. And now? You quite literally ARE the good news! Thanks to you, SGN lives on, joining the ranks of the historic @cbsnews network! See you all soon!

"Could not be more excited and proud to be partnering with CBS-Viacom to be able to bring Some Good News to so many more people. From the first episode, our goal was to create a news show dedicated entirely to good news.

"Never did I expect to be joining the ranks of such a historic news organisation as CBS," the 40-year-old actor said in a statement.

According to The Hollywood Reporter, the Viacom CBS won the bidding war and the feel-good series will now be broadcasted to a wider audience.

A new host for the show is yet to be announced. 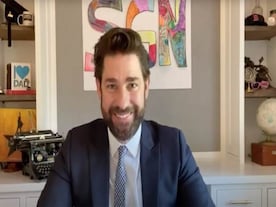