Once upon a time, in a city called InstaMumbai, there lived a lawyer named Anuradha Verma. Her defining characteristic appears to be dressing as uncomfortably as possible -- high heels, boots, tight black pants, bulky jackets in a tropical, equatorial city. What is she thinking? It's hot, but in the wrongest possible way. Her high heels, which are part of her court uniform, seem to work though. After all, she's never lost a case, we're told. However, one day, what she does lose is her daughter.

Lest you think she's a careless mother, Anuradha screams her daughter's name out again and again, and at such a high decibel that everyone vacates the crowded school field where a Sports Day-esque event was being held. Either that or Anuradha just stood there and shrieked for hours while the school carried on with its events and then emptied out when they were over. Whatever the explanation, we see Anuradha, standing alone, yelling for a disappeared daughter. 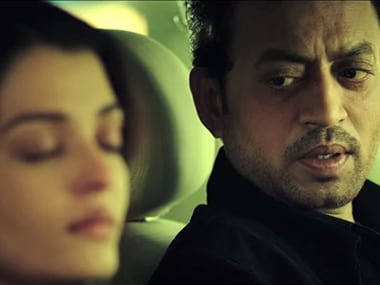 screen grab from the trailer.

Fortunately, Anuradha has a friend in the police, who shares her love for jackets. Inspector Yohaan (surnames are for wimps, bro) looks and sounds like he's watched Sin City and Shahenshah too many times. He's the most decorated cop in the city and is currently facing a suspension because he took bribes (to pay for the jackets in his wardrobe perhaps?).

Unfortunately Anuradha can't ask him for help because a male voice calling from a private number has told her that if Anuradha involves the police, that's the end of her daughter. To get her daughter back, Anuradha must take on the case of a convicted rapist and murderer named Miyaaz and get him bail. If Anuradha fails, bad things will happen to her daughter. Mr. Private Number is also watching Anuradha's every move, he tells her. So no funny business.

It turns out Leather Jacket Yohaan was the one who caught Miyaaz. He now embarks on a second investigation with Anu, who needs to find a loophole in the open-and-shut case in order to get Miyaaz off the hook. The clues helpfully show up as and when Anuradha and Yohaan need them to, but the duo does come up against a few dead ends, which is quite frustrating. So much so that at one point, Yohaan just can't take it anymore -- he whips off his jacket and flings it to the ground.

Or maybe that was Irrfan's version of throwing in the towel. Perhaps that was the moment, during the shooting of Jazbaa, when the actor realised the lure of being able to play Hero opposite Aishwarya Rai Bachchan had landed him a film in which a dog has the best role. Not only because the dog is an unexpected twist, but also because the rather handsome Alsatian gets to run the hell out of the film within about a minute of its first appearance.

Irrfan, on the other hand, has to overact his way through about 120 minutes of Jazbaa and utter lines like, "Neend mashooka ki tarha hai" (while cradling a drink, naturally) and "Run, Yohaan, run!" (Yes, he is indeed referring to himself in third person. Jazbaa takes its toll on everyone.) On the plus side, at least Irrfan doesn't have to say, "Yeh definitely nose ring hai," while holding up a nose ring, as Kaizad Kotwal does.

Every character in Jazbaa has to mouth absurdly bad dialogues, but as the heroine, Bachchan gets the worst of them because hers are also supposedly poetic. After being told about a character named Sia, who used to cup her coffee mug, Bachchan's Anuradha observes, "Sia coffee mug ke tarha relationships ko bhi mehsoos karna chahti thi." To another mother, Anuradha says, "Zakhm toh ek dusrey sey baat kar sakte hain?" thus evoking an image of two festering wounds in conversation.

Zakhm 1: What's your story?
Zakhm 2: I was once an eardrum. But then I was taken to Jazbaa and ever since...(weeping noises). Aishwarya just wouldn't stop screaming. She just went on and on, and I just couldn't take it. I exploded and was reduced to bloody pulp. (more weeping noises) And you?
Zakhm 1: They used to call me Common Sense. I made the mistake of hanging around when Sanjay Gupta and Robin Bhatt started writing their version of the Korean film, Seven Days. Next thing I knew, I was the mangled, paralysed mess that you see now.
Zakhm 2: That's terrible!
Zakhm 1: It could have been worse. You should see what happened to my friend Acting after the Jazbaa shoot.

Jazbaa can take the credit for hiring actors like Irrfan, Shabana Azmi and Chandan Roy Sanyal, only to draw out of them some of the worst performances of their careers. The best thing about Azmi's onscreen appearance are her saris and the one satisfying moment in the film is when -- SPOILER ALERT -- Roy Sanyal is run over.

Irrfan is the only one who can make a few of the atrocious dialogues sound anything other than ridiculous. However, he isn't reason enough to sit through the infuriating stupidity that is Jazbaa. There are so many gaping holes in the film's logic that you may want to join Bachchan in one of her many shrieking fits in Jazbaa.

How does the kidnapper have his eyes on Anuradha? Why is Yohaan helping Anuradha when he doesn't believe he caught the wrong guy? Why would the kidnapper go to the trouble of using a dog as a courier only to show up at the pickup spot, with Anuradha's daughter in tow? Why would a rich and powerful man trust a petty criminal whom he doesn't really know with something as delicate as his son's safety? Why does an MP not have an army of minions to do his dirty work? How is a suspended police officer calmly carrying out an investigation without anyone batting an eyelid? How does a junkie who has been behaving like a deranged lunatic become coherent and sober overnight? Why did the kidnapper suddenly stop calling Anuradha?

One of the meta questions that Jazbaa raises is, just how shameless is Gupta? The director has the audacity to end his film with a slide that tells gives you statistics about rape, as though it's an issue close to Jazbaa's heart. Does Gupta really think that we won't notice how one woman's rape is re-enacted for the audience's viewing 'pleasure' no less than three times? It didn't need to be shown even once. Do the depressing statistics make up for how the film suggests women should feel guilty about working hard and choosing to leave an unhappy marriage? Jazbaa also suggests daughters raised by single mothers are more vulnerable and therefore likely to suffer violence in the hands of strangers. What gives?

The only thing that tops the number of questions Gupta fails to answer is the amount of glycerine Bachchan and Azmi use in Jazbaa. Or maybe they spent all of their non-shooting hours weeping over the decision to do this film and therefore appear red-eyed in every other scene.

Gupta takes the plot of the Korean film Seven Days, but there's none of the tension or ambivalence that has made South Korean crime thrillers so distinctive and popular. The director appears to think that panoramic shots of Mumbai as seen through Instagram will make up for a slack script and absurd lapses in logic. As things stands, the only suspense while watching Jazbaa is in figuring out which Instagram filter would render Mumbai's skies to look as they do in Gupta's imagination. My money is on Mayfair, X-Pro II and Lo-Fi, with the occasional Perpetua.