IIFA 2017: Best, worst dressed celebs over the years from Deepika to Neha Dhupia

The 18th IIFA awards will be held in New York this year over 14-15 July (15, 16th July, for the Indian audience). The grand two day celebration is known for championing Indian cinema and all the artists who have contributed in taking Hindi cinema beyond the realm of our own nation.

However, films are not the only thing that are celebrated at the IIFA awards.

Every year, celebrities and other members of Bollywood come out in scores to showcase fashion and their personalised style with grace and oodles of panache. We see a bevy of beautifully (sometimes not) turned out individuals that give us #FashionGoals for months after the award show has come to a close.

This year, we thought we would bring to you a round-up of the fashion that has been displayed on the IIFA red (and by that we mean green) carpet over the years, as stars attend the various official IIFA events (IIFA Rocks, IIFA Fashion Extravaganza, IIFA Awards Green Carpet, etc.)

Here is our pick of the Best Dressed celebrities at IIFA It was impossible not to feature Deepika Padukone in this ethereal avatar on our Best Dressed list. Dressed in a Sabyasachi gown, there is not one thing about this look that we can point a finger at. From the ensemble to the hair, make-up and accessories, Deepika was the definition of 'slay' at last year's event. Sayani Gupta best known for her performance in Margarita, With A Straw wore this edgy (literally) outfit by designer Amit Aggarwal at last year's IIFA Rocks event. The cuts on the dress work perfectly, and Gupta's hair compliments the look 100%. Something about this number just seems to work on multiple levels. This embellished long kurta by designer Sabyasachi that Bipasha Basu is seen sporting at IIFA 2015, is one look that will be remembered for years to come. Classic and elegant, the star seems to have carried off this Indian ensemble with elan.

The pulled back hairstyle along with the subtle make-up given us the perfect vintage look and feel. Some may feel the look is a tad bit too ostentatious for the occasion however we feel like she deserves due credit here. This white number by designer duo Shantanu and Nikhil not only gave us fashion goals, but it also combines 'oomph' with class and gives us a pretty neat package. The actor's fit physique only compliments this slinky piece. Shahid Kapoor cuts a sharp picture in this cobalt blue two-piece suit at the 2016 IIFA green carpet. The clean cuts of the outfit along with Kapoor's adorable face, paired with his slim tie gives us the perfect ensemble that a male can sport on the occasion of a big event.

Disclaimer: If you're wondering why most of our favourite best dressed looks are from the previous year, the fashion game of Indian celebrities has picked up only recently in our humble opinion (yes, we said it #SorryNotSorry).

Here is our pick of the Worst Dressed celebrities at IIFA This Falguni and Shane Peacock number sported by Richa Chadda is the stuff of nightmares (further research shows that actor Sameera Reddy wore the exact same outfit at another event and all we can wonder is — WHY?).

Looking like a hybrid between a flamingo and a carnation, this is exactly what one should never wear to an event where there is more than one guest, and there is even the slightest chance that you can be seen. 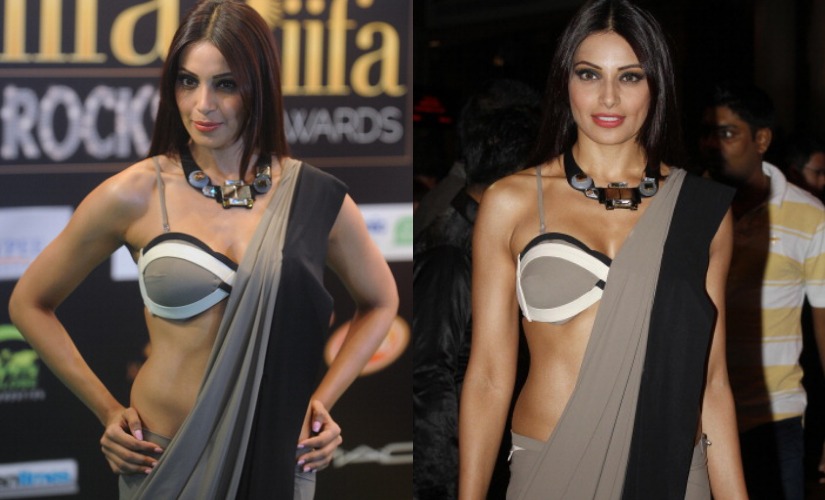 Why wear a sari, dress, or a gown when you can wear a bikini top and throw a blanket over it. Basu's neck-piece is no better. Looking like a scary contraption straight out of a sci-fi movie, we can't imagine what she was (or wasn't) thinking when she decided to sport this look at the IIFA rocks event back in 2012.

This 9 yard wonder designed by Shivan Narresh has left us slightly speechless, to put it mildly. Wearing a creation by designer Neha Agarwal, here we have actor Neha Dhupia looking like a Batik print stencil gone wrong in this too-frickin'-yellow outfit that has us reaching for our sunglasses and a toothpick to stab in our eyes simultaneously. Dress so nice, we had to have it twice. Neha Dhupia finds herself featured in our Worst Dressed list two times over, and looking at these two outfits, you shouldn't be too surprised. Sporting this H&M number, in 2016 Dhupia got confused and thought she was the nurse at the emergency ward of the Lilavati Hospital and not a Bollywood star attending one of the most prestigious awards ceremonies celebrating Indian cinema in the city of Madrid.

She also thought she worked part-time as a matron. We know he can pull off almost any whacky ensemble he wishes to, but checks and stripes have even this magical man beat. Sporting this creation by the wildly popular international clothing line Balmain, we are not sure what look Dutta was going for. Ugly chandelier? Mitochondria? Micro-organisms floating around a coral reef? The best part about our former Miss World's outfit is Mahesh Bhupati.

The awards will be held at the MetLife stadium, in the heart of New York this year. There will be a live telecast of the celebration on Colors TV. Rest assured we'll be watching out for the various looks our favourite celebrities will be sporting. Will you?