New York: A key accuser in the New York City rape trial of Harvey Weinstein broke down in tears on the witness stand on Monday during an exhaustive cross-examination over the nature of her relationship with the once-powerful movie mogul.

The drama, which prompted the judge to send the jury home about an hour earlier than usual, came as the defense sought to paint the 34-year-old woman as an opportunistic manipulator who took advantage of Weinstein while pursuing an acting career, even after he allegedly raped her.

The woman said she tried to make Weinstein “my pseudo father” after a rough upbringing. She said she sent him flattering emails and kept seeing him because “I wanted him to believe I wasn’t a threat.”

“I was afraid of his unpredictable anger,” the woman testified.

She became emotional while reading an email passage about being abused earlier in her life. It was part of a lengthy confessional email she sent to her then-boyfriend in May 2014 about her relationship with Weinstein. She was bawling as she left the courtroom, and her cries could be heard from a nearby witness room.

She returned after about a 10-minute break, but continued to weep loudly, resting her head on the witness stand and blotting tears with a tissue. The lead prosecutor tried to console her, but she couldn’t continue. Her cross-examination will resume Tuesday.

“I remember the day I realized I was controlling my world because I was sexually assaulted and that story played out where I played into sexual dynamics with people to feel like I would never be taken advantage of again,” she said, her voice quaking just before the judge halted the proceedings.

Weinstein lawyer Donna Rotunno, known for her criticism of the #MeToo movement, sought to shoot down the woman’s rape allegation by zeroing in on her admission that she also had noncoerced sexual encounters with Weinstein that she said only happened after “a long negotiation.” 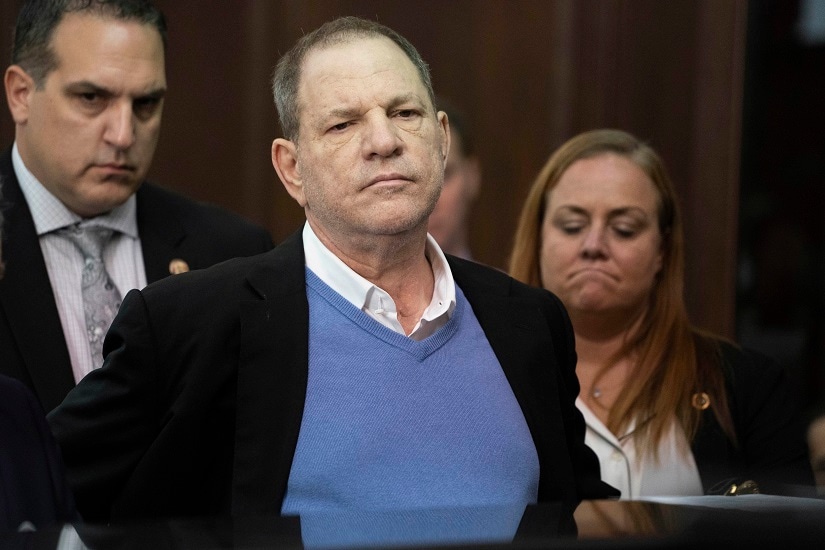 The woman responded: “I felt there was an aspect to the way I felt I needed to protect myself that had an element of manipulation.”

At one point, Rotunno shot back: “You made a choice to have sexual encounters with Harvey Weinstein when you weren’t sexually attracted to him. ... You liked the parties and you liked the power.”

The witness had told the jury last week on direct examination that Weinstein trapped her in a New York hotel room in March 2013, and angrily ordered her to undress as he loomed over her, and then raped her.

The second attack came eight months later at a Beverly Hills hotel, where she worked as a hairdresser, after she told Weinstein that she was dating an actor, she said.

“You owe me one more time!” she said he screamed at her. She said she begged him not to take off her clothes, but he ripped off her pants before pushing her legs apart and raping her.

The woman said she has not testified before a grand jury regarding that matter and hasn’t decided whether to pursue charges, saying she asked California prosecutors “to just give me space until this trial is over.”

The witness was grilled on Monday about emails that continued after those alleged attacks.

From the emails, it appeared the witness was still cutting Weinstein’s hair in early 2014. In one January 2014 email, he wrote her: “That’s the best haircut and trim I’ve gotten. I’ve gotten a million compliments. Thank you.”

She wrote back: “Your the one who makes it look good with your smile and beautiful eyes!! But thank you that makes me so happy to hear :)”

Rotunno asked the witness whether she was trying to make Weinstein “believe that you cared about him.”

“I did want him to think that I was naive and safe and not a threat,” she responded.

“I’m observant but I’m not that smart,” she replied.

Sirens blared outside the courthouse as the woman started reading from the email that ended up setting her off, prematurely ending the ninth day of trial testimony.

“Harvey was my father’s age and he gave me all the validation I needed at that time,” she said as she choked up, adding, “I tried to make him a pseudo father.”

She began weeping uncontrollably after reading a passage attempting to explain that she had submitted to Weinstein’s sexual advances because she had been sexually assaulted when she was younger. She was still crying after an eight-minute break when the judge cut the day short.

The Associated Press has a policy of not publishing the names of people who say they are victims of sexual assault without their consent, unless they go public. The AP is withholding the name of the woman because it isn’t clear if she wishes to be identified publicly.

Weinstein appeared to be sleeping at times during the emotional testimony, closing his eyes and drooping his head in his chair at the defense table. A juror also dozed off for a spell, prompting a scolding from the judge.

Asked why he was sleeping as he left the courtroom, Weinstein scowled at a reporter: “Oh please.”

The testimony comes at a pivotal moment in the trial of Weinstein, whose downfall energized the #MeToo movement. He is charged in New York with the 2013 rape and also sexually assaulting Mimi Haleyi, a former Project Runway production assistant, in 2006. A conviction could put him behind bars for the rest of his life.

Weinstein, 67, has insisted that any sexual encounters were consensual. His lawyers aim to raise doubts about the rape accuser’s credibility by seizing on her complicated history with the former film producer.

The woman testifying Monday caused a stir Friday with her description of Weinstein’s anatomy, saying she thought he had characteristics of both male and female genitalia, adding that she was “filled with compassion, absolute compassion” and that “it seemed his anger came from a place of pain.”

The woman offered a similar description in the email to her then-boyfriend: “On the lower half of his body he had some type of surgery or burns.” She said she never asked Weinstein what had happened. How mortality rates for COVID-19 vary depending on age group