Grant gets a call for US TV show, yet to answer it

Los Angeles: Efforts were afoot to bring in British actor Hugh Grant in place of Charlie Sheen in the top-rated US TV comedy, 'Two and A Half Men'. But final negotiations with the ‘Bridget Jones' Diary’ star are still stuck and he may opt out, a person briefed on the matter told Reuters. Producers are trying hard to revamp the money-spinning show for a 9th season, an industry source said on Wednesday.

"He (Grant) was in the mix, among others. I don't know if it's dead, but it's unlikely," said the source, who declined to be named because talks are confidential. Industry website Deadline Hollywood said Grant pulled out of final negotiations on Tuesday due to "creative differences". 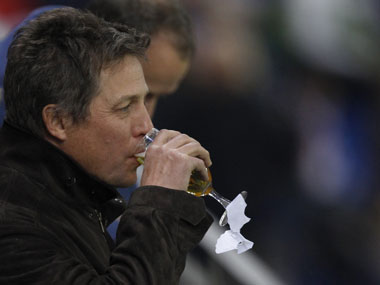 Sheen, whose role as a womanising bachelor made him the highest paid actor in US television, was fired in March. His exit left programme maker Warner Bros Television and broadcaster CBS in disarray over the next season of the show, which usually returns in the fall.

With just a week before CBS presents its 2011-12 programme line-up to advertisers in New York on May 18, the network has yet to announce its plans for ‘Two and A Half Men’. The source said producers hoped to announce a new star name in the next few days.

CBS and Time Warner Television declined to comment on the involvement of Grant, which was first reported by Deadline Hollywood. Several other names, including US actors Rob Lowe, ‘Entourage’ star Jeremy Piven, and John Stamos, have been circulating in recent weeks as possible additions to the cast.

But Grant's name came out of the blue and Deadline Hollywood was the first to report concrete negotiations with a specific star. Grant's representatives could not immediately be reached for comment on Wednesday.

Grant, 50, known for his bad boy charm in movies like ‘Four Weddings and a Funeral’ and ‘Love Actually’, has done little television in the past and has not made a Hollywood movie since comedy "Did You Hear About the Morgans?" in 2009. Deadline Hollywood reported that Grant had been offered more than $1 million per episode for ‘Two and A Half Men’. But the source said the figure under discussion was nowhere near that amount.

Sheen was reportedly making between $1.2 and $1.8 million per episode before he was fired for insulting producers following his latest stint in drug rehab. ‘Two and A Half Men’ is the most-watched TV comedy in the United States with about 15 million regular viewers and has been a lucrative source of advertising income for CBS, and syndication rights for Warner Bros Television.