In a scene towards the end of Gour Hari Dastaan: The Freedom File, there is a silent exchange between a chief minister (Vikram Gokhale) and our hero, Gour Hari Das (Vinay Pathak). It’s awkward — for the CM, who is squirming in discomfort — and painful for Das, who has waited 32 years for this moment. This scene with its quietude is perhaps the most significant achievement for writer-director, Ananth Mahadevan, and his co-writer, CP Surendran.

Gour Hari Dastaan grows on you slowly, much like Das, the man whose lifetime accessory and lifeboat is a fat file of documents that prove he participated in India’s freedom struggle. Based on a true story, this is not an easy subject to realise into cinema. It’s a monotonous, painstaking journey of a man who knocked on bureaucrat’s doors and wrote letters for 32 years. The film moves back and forth from 1975-76 to Mumbai in 2002-2006, with occasional black and white flashbacks showing Orissa in 1946. At the age of 14, Das had joined Mahatma Gandhi and become part of the “Vanar Sena”, which helped deliver important messages between revolutionaries. He was jailed for this by the British, for 90 days.

In independent India, Das’ struggle begins all over again when in 1975, he is denied the certificate that officially accords him the title of “freedom fighter”. The certificate is called “tamrapatra” since it’s made of copper and at one point, Mahadevan and Surendran can’t resist inserting a reference to the copper in order to deliver a deserving jibe to the callousness of the government.

Das develops a Gandhi-like stubbornness and quietly persists with his fight while his wife Lakshmi (Konkona Sen Sharma) watches every defeat-filled moment with weary frustration. Time rolls along to 2002, when we see Das in his 70s, at a local newspaper office. It’s from this point that the final stage of his struggle begins.

The only hitch is that Pathak, who is good in his depiction of the Zen-like demeanour of a resolute Gandhian, does not look above a second over 50 years when he’s supposed to be 70. Instead of an Oriya accent, he talks like an educated Bihari.

Glitches aside, Pathak, last seen in an impressive performance in Badlapur, slips well into the ahimsa skin. Alongside him, Sen Sharma is quite convincing as his aged wife, making the most of her silent presence, emotive face and a slow gait that doesn’t seem contrived.

Das’s story catches the eye of Rajiv Singhal (Ranvir Shorey), a 40-something journalist who decides to try and help Das. There is an attempt to add some drama through Singhal’s failed marriage and inter-office romance with a colleague(Tannishtha Chaterjee), as well as his clashes with his boss. While this does not add much to the main story, it does provide an interesting facet to Rajiv, who is revealed as a misogynist loser on one hand and an idealist on the other.

What is more effective than this angle is Rajiv’s personal interaction with Das. Like when he tells the teetotalling Gandhian that alcohol should be made free.

We see Das’s innumerable visits to government offices, full of dusty files, and the evasive lines that bureaucrats feed him over “chai paani”. And indeed, tea is given the prominence it always gets in such circumstances. A particular one has a greedy officer grab the extra cup left untouched by Das. Scenes like these, performed by minor but good actors in cameos, and powered by dialogues infused with wry humour, inject much-needed life to an otherwise slow screenplay.

When Das visits a clerk (Saurabh Shukla), Orissa seems to be missing from the map of India. Shukla’s ignorance, his well-timed banter and the explanation of why there’s no Orissa in the map that’s hanging in that office is telling. All the actors who appear just once or twice — like Shukla, Murli Sharma, Achint Kaur, Gokhale, Mohan Kapur, Vipin Sharma and Siddharth Jhadav — shine in their brief roles.

Mahadevan takes every opportunity to drive home the point that a corrupt system seems to be a bigger enemy than the British. There are a few faux pas, like the silhouette of Das in an uncharacteristic filmy effort to show him replicating the forgotten Gandhi at his spinning wheel.

But mostly, most obvious details in the film do strike a chord. Like how lifts don’t work 27 years after Independence; how long queues snake outside Parliament offices; how the common man’s voice goes unheard and politicians prove to be only beneficiaries of India’s freedom. A pleasant background score by violin maestro, Dr L. Subramanium, completes the authentic tone of the film.

In it’s honest storytelling, the deep significance and relevance of Gour Hari Dastaan stays with you. Especially since it’s an Independence Day release. Just look at how today, the flag for which Das fought is sold at traffic signals. “Paanch ka teen” anyone? 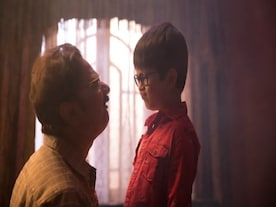 Vinay Pathak on Chintu Ka Birthday: Perfect film for our times, it's about finding joy in the small things With a recent translation, Sunil Gangopadhyay's Bengali novel Blood is set to entice a new generation of readers