George Clooney was an okay kisser, says his Out of Sight co-star Jennifer Lopez

Asked if she's had bad screen kisses, she said: "It happens. I've done over 30 movies, so the ratio... some are good, some are not so good... I've never had anybody with bad breath, which is good," reports femalefirst.co.uk. When she refused to take names, Daily Show host Jon Stewart told her he thought Clooney would be the worst of all, prompting her to laugh and reply: "He was okay. He was alright."

The American Idol judge also admitted she doesn't think she would do well on the show because she hasn't got a "really big voice".

Asked if she would take part if she was a teenager again, she said: "I was so blissfully ignorant and fearless back then, now I'm afraid of everything.

"Back then, I used to do anything. I probably wouldn't have made it through. You have to have that really big voice. I have a pop voice. I love my voice! It's done good for me. But... some of these singers are amazing," she added. 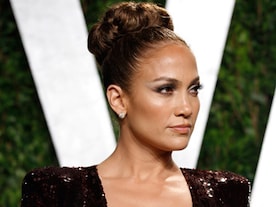 Affleck still in touch with JLo, happy for her