Game of Thrones season 7 spoilers are here and it involves updates on Jon Snow, Daenerys

Spoiler-averse Game of Thrones fans, turn away now — this article might have details that will give away the plotline.

Stars Kit Harington and Emilia Clarke were spotted filming together in Spain earlier this week on 24 October. This is an interesting twist to the plot; given where the characters are at the end of season six: Jon Snow has just taken over the North as King, and Dany is sailing for King's Landing with the Greyjoys' Iron Fleet.

Somehow, the two will cross paths. In the photos leaked from the set, Jon Snow and Daenerys meet up and talk. The photos, which have officially broken the internet, show Daenerys’ white blonde hair and Jon Snow’s long, gorgeous locks.

Hopefully they’re talking about becoming allies and uniting their armies to take on Cersei in King’s Landing and the White Walkers?

Even though Jon Snow is technically Daenerys’ nephew, many fans hope they’ll get together, given the amount of fan fiction that is dedicated to their coupling.

A small note: Jon Snow and Daenerys have never crossed paths in the books.

Also there are photographs of  Tyrion Lannister and Jon Snow to finally meeting after six seasons apart.

Jon Snow also finally comes face-to-face with Theon Greyjoy, the man who betrayed his family and razed their home to the ground, the King in the North can't hold his anger in check and resorts to throwing him around in a fit of anger.

While the paparazzi is busy clicking photos of the cast filming the seventh season, a report on the website Gamesradar, states that a Reddit account by the name of Free Folk uploaded the entire plot of season 7 to a reddit subthread that has now been deleted (but you can find them here). Free Folk had hit bullseye with its spoilers for the last season.

Game of Thrones season 7 will consist of seven episodes and will release in the summer of 2017. 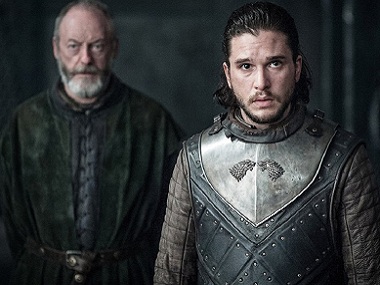 Game of Thrones Season 7 Episode 3 review: Jon and Dany meet, but Cersei's the one to watch