The International film Festival of India in 2019 (IFFI 2019) represented 50 years of the film festival and was therefore an important cultural event. IFFI showcases the latest in world cinema as well as Indian art cinema, but when one receives the screening schedule, one cannot really make an educated guess on what films might be worth watching; one usually runs into noteworthy films entirely by accident.

Once upon a time, certain countries (France, Russia) and directors could be taken as reliable in terms of the quality of films they made but even that has changed in recent years. Retrospectives of masters have also fallen out of favour because young audiences get impatient with old films. So what IFFI 2019 offered were the International Competition section, a Country Focus (Russia), a Filmmaker in Focus (Takashi Miike), a Retrospective (Ken Loach) and two Homages (Agnes Varda and Bernardo Bertolucci) apart from standard components like the Indian Panorama, World Panorama and Restored Classics. The organisers seemed to have given out more tickets this year, which meant that I couldn’t get to see some films I wanted.

The very first film I caught was an anthology called Interdependence which brought together filmmakers from various countries (ranging from Afghanistan to Switzerland) to take up climate change as an issue. Some of the films were spectacularly filmed but there is still something vaguely disagreeable about films that conjure up stunning images out of an alarming situation, trying to see beauty in something that has only frightening possibilities for everyone.

After the disaster of Interdependence in which the best contribution was the low budget Indian offering from Nila Madhab Panda — using the pollution in Delhi to mount an amusing plot about a couple separating because of a disagreement about whether or not they should move out of the city or not (reminiscent of Farhadi’s A Separation, 2012) — my immediate impulse was to try out something by Ken Loach. Ken Loach is a socially conscious filmmaker not particularly interested in film as film but who tries to tackle issues. The film I saw — Sorry We Missed You (2019) — is his latest one and comes immediately after I, Daniel Blake (2016).  In this film, Ricky is an out-of-work truck driver who takes up the opportunity to join a franchise and become a ‘self-employed’ delivery driver. He has no truck of his own and this means he has two options: either hire a truck from the company or buy one on credit and pay off the loan thereafter out of his earnings; both options can be disastrous financially and the family gets closer and closer to ruination. Still from Sorry We Missed You

As in I, Daniel Blake, Loach paints a disheartening picture of what the working class is going through today but the film still leaves us asking questions, since it is so entirely one-sided in its portrayal of working class troubles. Loach is painting a picture of a highly competitive, market regulated system and one begins to wonder if his treatment of Ricky as a victim with no recourse is really useful. My response to social criticism of this kind is to ask if the filmmaker has any constructive suggestions to offer since he shows Ricky’s condition only as irremediable.

Judging from the kind of international fare offered at film festivals, one gathers that there is a great compulsion for films to stick to themes favoured officially by the countries the filmmakers hail from. Poland, for instance, has been obsessed with Stalinism and much more so than other countries that suffered as much under Stalin. Agnieszka Holland worked under Krzysztof Zanussi once but she is now a leading filmmaker in her own right. Her English language film Mr Jones is about an actual Welsh journalist Gareth Jones who visited the USSR in the early 1930s and reported on the famine in Ukraine, brought about by forced collectivisation. Jones is led to make his discoveries by the fact that the USSR is bankrupt but still building factories; so where does the money come from for such investment? He makes enquiries and gradually understands that ‘wheat is Stalin’s gold’ and in the bread-basket of the world, people are starving. The film begins with George Orwell writing Animal Farm — an allegory of Soviet history — and Jones is later shown to meet Orwell. A thing I found disconcerting about the film was Gareth Jones not describing what he saw — which includes cannibalism since he is shown to throw up when he learns of what he has eaten — clearly when he returns, but lapsing into cliché about the ‘deaths of innocent people’. Mr Jones could have been extremely powerful but it does not come across as more than tepid. The reason, I believe, is because the film seems to be taking a biased position to begin with. The Russian people also suffered enormously under Stalin but Russian cinema gives us more complex accounts than Polish cinema, although its portrayals are not less horrific. The reason is perhaps that Poland sees itself as a helpless victim of Stalin while Russians feel responsible for him, since he came out of their Revolution.

Countries like those from Scandinavia offer a different kind of cinema altogether and they usually stick to intense interpersonal relationships with no political undercurrents, since the countries of the region have had stable democracies and not suffered as much in the last century. May el-Toukhy’s Queen of Hearts from Denmark may be described as a ‘typical’ film from the region since it deals with the sexual relationship between Anne, a lawyer involved in advocacy cases pertaining to young adults, and her step-son. Gustav is 17 years old and moves in with Anne and her husband (Gustav’s father Peter, with whom he shares a strained relationship). 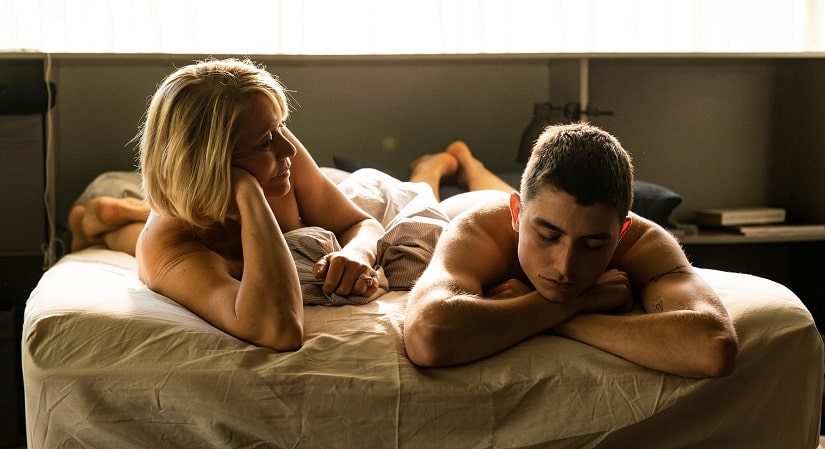 Gustav becomes obsessed with Anne and knowledge of it reaches her husband, but Anne responds by denying it altogether, accusing Gustav of lying and making it up out of spite. The film focuses largely on the sex between Anne and Gustav but neglects to examine the ‘parental’ side. My argument is that a relationship between step-mother and son would include a power/authority component which might render it complex, taking it beyond a liaison between an older woman and an adolescent male.

The Turkish film Chronology by Ali Aydin tries to be intriguing but with mixed results. In this film an architect Hakan and his wife Nihal have no children and her inability to conceive is evidently a slur on his manhood. Later, the husband sees his wife with an elderly person, her former professor of whom he was unaware. When Nihal then goes missing he accuses the professor of sexual malfeasance, complicity in her disappearance and assaults him, though it emerges that the professor was merely friendly with Nihal and their relationship was above board. The film follows a formula invented by Iranian director Asghar Farhadi by which a mystery is created but later cleared up when the cause is revealed to be a regrettable local attitude. In Chronology, which uses flashbacks copiously, the regrettable attitude is laid at the doorstep of patriarchy. The two most interesting films at IFFI 2019 — at least among those I saw — were Takashi Miike’s First Love and Kantemir Balagov’s Beanpole. Miike made his mark in horror (The Audition, 1999) but is best known for his macabre humor. First Love has several strands: a young boxer who learns he has a tumor in his brain, a yakuza gang into drugs, two crooked policemen, one of whom has infiltrated the gang, a prostitute who is also a drug addict and pursued by her father’s ghost. It may be difficult to follow the story, its twists and complications, but it is deliberately goofy and highly watchable, although it cannot perhaps be taken seriously except as entertainment; the film leads up to a parodic shootout, full of blood and gore, between the numerous players. A yakuza’s arm is severed, and another tries to get the pistol out of the hand attached to the same arm and still clutching it. Miike was present at the screening and got a standing ovation from the crowd, which will give the reader some sense of how exposed young Indian cinephiles are to international cult cinema. My own favourite film at the festival was Kantemir Balagov’s Beanpole. Balagov, who is only 28, made a mark earlier with Closeness after going through a cinema workshop conducted by film legend Alexandr Sokurov. Beanpole is set in Leningrad a year after the end of the war and deals with two women — Iya and Masha — who have gone through the trauma. Iya has a nervous problem brought on by the trauma and breaks off into fits; thus, when looking after Masha’s child, she accidentally collapses on him and kills him. Masha cannot bear children because of certain injuries and she therefore hits on the plan that Iya should bear a child by some man and it will rightly be hers. Mash therefore goads Iya into sex with strangers so that she will bear ‘her’ child.

What marks out Beanpole from most of the other films is that it is not taking a position on issues or expressing laudable sentiments and testifies only to human experience. Balagov is too young to have any sense of the war but his society still carries it and he gives us a compelling picture of Russia in 1946. This sense of cinema disseminating actual human experience is something that most films do not convey today, when they are basically appealing to juries by taking up issues favoured at film festivals — like those pertaining to gender, human rights or child abuse. Beanpole was part of the ‘Russia Focus’ but most of the other Russian films were disappointing. Up to 2010, Russian cinema was the best in the world but not so today. IFFI 2019 also featured seminars and ‘masterclasses’ and I will just give a brief account of a seminar on film criticism in India that I was part of. The seminar was conducted by the Indian chapter of FIPRESCI, which has VK Joseph as president and Premendra Mazumder as secretary. The event went on for about an hour with nine speakers including the chair and the moderator. Many of those speaking were National Award winners and critics of standing. What came out in the seminar was that there was confusion among the public about criticism and the discipline had now expanded to include academic film study.

Criticism, which is generally believed to ‘promote good cinema’, has a more primary obligation to build aesthetic theory about film because ‘good cinema’ cannot be rigorously defined, though a ‘good film’ can be recognised. Academic film critics are not engaged in film appreciation but in pedagogy about aspects of film that do not even include their evaluation as art; it is therefore for non-academics to create a platform whereby some sense of how to critique cinema as entertainment or art can be formulated. As it is, film critics operate individually in their own fields of influence and mainly write on art cinema; but given the reach of popular cinema it is essential that it should be studied and its aesthetic theorised about, as has been done in Hollywood. Satyajit Ray and Chidananda Dasgupta were legends in the field but they were dismissive of popular cinema and that is where film critics need to focus if they should be relevant to the film-going public.