Among all the triggers for literary masterpieces we know of, volcanic ash surely counts among the more unusual.

When the Shelleys — Percy and Mary (then Godwin), Lord Byron and John Polidori were forced to spend a summer vacation in 1816 cloistered indoors, courtesy gloomy weather brought on by drifting volcanic ash from an eruption in Indonesia, readers across generations received the gift of two timeless horror stories, in the form of Frankenstein, and The Vampyre.

While Frankenstein's legacy is a subject for a different essay, Polidori's The Vampyre — about an undead aristocrat by the name of Lord Ruthven, who fed on his victims' blood — would in turn inspire another towering classic of the genre: Bram Stoker's Dracula.

Stoker narrated his story mainly through the diary entries of his characters: Jonathan and Mina Harker, the captain of a ship called the Demeter, a doctor by the name of Seward. Together, their accounts spoke of an inhuman fiend, truly the devil incarnate, the titular antagonist of the tale.

Just like Stoker himself was inspired by Polidori, so too have storytellers across various mediums turned to Stoker, retelling his Dracula in film and the printed word. As for Count Dracula himself, he has become an indelible part of modern pop culture — there have been over 80 screen adaptations featuring the character, the brides of Dracula, the sons and daughters of Dracula, the blood of Dracula, the tomb of Dracula, the death of Dracula, black Dracula, Dracula in Istanbul, Dracula in LA, Dracula during Christmas, various people meeting Dracula (including Batman, Billy the Kid, Nancy Drew and the Hardy Boys, Abbott and Costello, and — what is this, a crossover episode? — Frankenstein).

The latest iteration of Stoker's story comes to us via the Sherlock team of Mark Gatiss and Steven Moffat, whose BBC-Netflix production of the saga, released this month, spans three episodes, each about an hour-and-a-half in length. It's nowhere near as outlandish as many of its 80-plus predecessors, which is a solid point in its favour. We Dracula enthusiasts like our Dracula unadulterated, thank you very much. 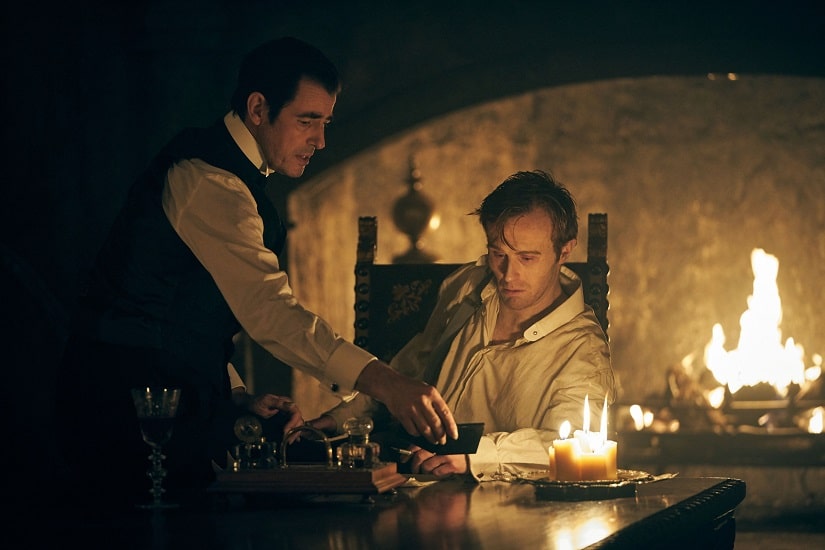 The first two episodes lean mostly on material from Stoker's novel (with the occasional, well-conceived change or two). They depict the hapless Jonathan Harker's arrival in Transylvania, at the castle of Count Dracula, and his horrifying realisation that lawyerly advice isn't all he is providing his enigmatic new client. Later, the narrative follows Count Dracula's journey to England, an ill-fated sea voyage that leaves most of his co-passengers and the ship's crew dead.

It is in the third (and final) episode that Moffat and Gatiss bring their Sherlock schtick to bear — showing Dracula in modern-day England. The characters who people this concluding part of the story — Dr Seward, Lucy Westenra, Renfield (Gatiss himself, in a small role) — have also been suitably updated. And this is where the series falls apart.

But we're getting ahead of ourselves.

The first two episodes of Moffat-Gatiss' Dracula certainly don't give any hint of the blah ending that is to follow. The first episode is especially finely etched, with its framework — of having an extremely unwell Jonathan Harker (John Heffernan), who has clearly escaped some harrowing ordeal, telling the nun at the convent he's sheltering at, about his experiences at the castle of Count Dracula (Claes Bang). The nun is Sister Agatha — Sister Agatha Van Helsing, we later find out, in a neat little subversion that Gatiss-Moffat deserve several bonus points for (as also for the casting of Dolly Wells in the part). She's keen to find out just what sort of monster this Dracula is, and her questioning of Harker imparts tension to a story most viewers already know too well. That there are some genuine shockers in store is entirely down to the showrunners' framing and narrative choices. After satisfactorily upending many of the conventional aspects of Stoker's story as also of commonly accepted vampire lore (more bonus points to Gatiss-Moffat), the action shifts to a confrontation between Dracula and Sister Agatha, and we see that these two are equally essential in driving along the narrative. If in Stoker's telling, Dracula was the most compelling character, then Gatiss-Moffat make Sister Agatha equally so — a nun questioning her faith but still drawing strength from it, her mind as sharp as the wooden stakes she carries on her person. In an early exchange with Harker, she comments acerbically on his lack of surprise that a message for help he receives in the count's castle in Transylvania, is written in English: "Of course not! You are an Englishman! A combination of presumptions beyond compare."

When the story moves on board the Demeter, it plays out like an 'An Then There Were None' mystery, with enough suspense even for viewers who're certainly more knowledgeable than the ship's crew and passengers of what's befallen them.

Bang is, as befits Dracula, creepy and suave (although not quite as much as Gary Oldman in the 1992 film). He's an aesthete in matters of blood, with a dark humour that his victims aren't particularly well-placed to appreciate.

Then we reach the shores of the UK, and this carefully constructed edifice — as we mentioned earlier — falls apart.

The third episode, the modern part of Dracula, is so dull, there were times I found myself wondering why I was even continuing to watch it instead of switching to a Witcher re-run. It picks up the story 123 years after the events on the Demeter, when Dracula is in England and reunited (in a sense) with his arch nemesis, Dr Van Helsing. Since she isn't immortal, this Van Helsing isn't Sister Agatha, but her doppelganger-descendant Zoe, who works for a foundation named after the erstwhile Jonathan Harker. Her laughable plan to capture Dracula goes awry so our favourite vampire (okay, third-favourite, right after these two) gets to sink his fangs into yet another victim. Enter Lucy Westenra, who fascinates everyone with her beauty, but Dracula mostly with her flagrant disregard for death. Just like Zoe, the question foremost in my mind too was what drew Dracula to Lucy — a decidedly ordinary young woman, exceptional only for her narcissism.

Like the character of Lucy Westenra, everything about this modern part of Dracula is ho-hum: the acting is ordinary, the setting is ordinary, and the plot barely passes muster. Gone is the macabre quality of the initial two episodes, the taut anticipation, the gorgeous scenery. You just want it all — like one of the long-suffering undead — to be over.

There's some philosophising at the end, which gives the finale its a-ha moment and redeems it from being a total washout. Also coming to the episode's rescue: the Zoe/Agatha-Dracula conversations, which have quite a Clarice-Hannibal throwback vibe (if Agent Starling had been a vampire hunter and Dr Lecter a vampire — although he did have a fondness for human blood, so there's that).

Perhaps Gatiss and Moffat needed a summer sequestered away in a cottage before finalising their version of Bram Stoker's Dracula. And a handy sprinkling of some volcanic ash.

Dracula is currently streaming on Netflix. Watch the trailer here —