Washington | Days after causing alarm with an unscheduled trip to the hospital, President Donald Trump tweeted a photo-shopped image of himself Wednesday as a rippling, bare-chested boxer.

The president is furious over media speculation following his sudden trip to a government hospital outside Washington last Saturday and the startling tweet was his latest attempt to put talk of ill health to rest.

In the picture, Trump's head is superimposed on the hulking body of a boxer -- an image taken from the publicity poster for the Sylvester Stallone movie Rocky III.

The montage, in which a distinctly airbrushed version of the 73-year-old president's face is used, comes without comment.

On Tuesday, while giving a reelection campaign speech in Florida, Trump fumed at length in a bizarre rant about his recent hospital visit.

He claimed, wrongly, that major media outlets were reporting he'd had a "massive" heart attack when he was taken, without prior notice, to the Walter Reed military hospital.

In fact, most media questioned the unusual circumstances of the visit, which would usually have been flagged in advance. The White House said afterward that Trump had simply decided to do part of his annual physical exam early, in order to save time later.

The tweeted photo of a hunky Trump drew instant and sustained mockery online, as well as retweets from the president's admirers, who enjoy the way he has brought showmanship into the White House.

The post was retweeted 124,000 times and received almost 405,000 likes as of 6:30 p.m. EST (0030 GMT) as many followers responded with memes and photos of their own, comparing Trump’s physique to that of former President Barack Obama.

"Now we know what they did to him at that mysterious doctor's visit?" quipped NBC News anchor Andrea Mitchell over the faked Trump boxer. 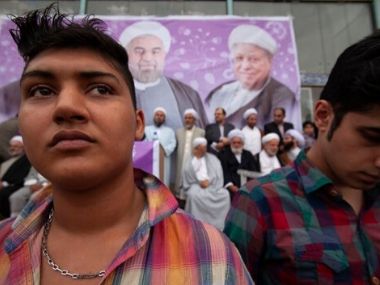 As US sanctions hit Iran's economy, the country's youth march on with dreams of dignity, a better future