Aah Salman Khan. Always a bundle of contradictions. If he’s being accused of running over people on one hand, he’s being lauded for Being Human on the other. This dual character seems to spill over on to his anchoring as well. So just when you think Salman is the upholder of the rights of the female contestants of Bigg Boss, he throws a curveball and proves that’s just a delusion.

This dichotomy that is Salman Khan was on full display in the last week of the show.

For those not in the know, Gautam and Diandra are two of the worthy contestants of Bigg Boss. Diandra Soares is a model. Gautam Gulati is a TV actor or some such, and is generally the bad boy of the house. She’s older than him. And they had found what seemed to be love in the house and were often shown sneaking into the bathroom for a moment of privacy – that’s the only room in the house, other than the smoking area, which has no cameras in it. Diandra also kissed Gautam on camera, therefore heralding a brave new world on Indian TV. But fickle are the ways of love, so Gautam promptly distanced himself from Diandra upon meeting some celerity visitors to the house who told him that his mother was disapproving of his older inamorata. He then went on to state on camera, repeatedly, and to various contestants, that he and Diandra were just friends and also lectured Diandra on her overt displays of affection. Diandra maintained a studied silence and made no moves to rekindle the romance. 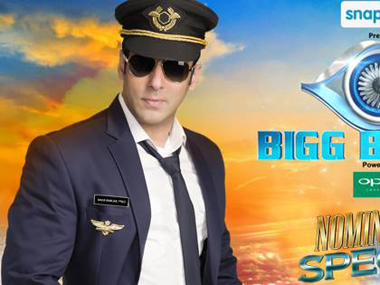 But Salman Khan would have none of this mistreatment of Diandra. So on the weekend show, when he plays schoolmaster and reads the contestants the riot act for their various mistakes through the week, Salman Khan took Gautam to task. He informed him that his behaviour was in very bad form. And he should stand by his relationship, and his denial of what had transpired between him and Diandra showed a total lack of spine.

Then just as we were still rah-rahing over how Sallu is not ashamed to stand up for his relationships or for the feelings of women, he decided to show us that one woman’s hero is another woman’s villain.

He trained his sights on another of the other contestants, Karishma, who neither indulges in any canoodling with other contestants nor deny having a boyfriend outside the Bigg Boss house. Salman decided that he would rib her about another contestant’s imagined feelings for her. The other contestant being Pritam, a married man. This ribbing resulted in Karishma shedding a few tears on camera and saying that she didn’t find this line of joking amusing. Valid enough. If I don’t like someone joking about my non-existent romance with a married man, it’s not an overreaction. It’s anyone’s prerogative – whether man or woman - to decide what qualifies as a joke and what qualifies as stepping over the line.

Salman would have none of this though. How could a contestant not laugh at a joke which Salman had cracked? How did it matter whether the person concerned felt that Salman had crossed a line or not? If Salman thought it was funny, it was funny. And being a sensitive sort, upon being ticked off by Karishma and being told that she didn’t think he should joke about her imagined hookup with Pritam, Salman threw a hissy fit and stomped off the set. Really. Because when you’re a star and when you tell someone to laugh, laugh they must.

Who cares if the “joke” is insulting to the woman concerned? Or might have some impact on her actual relationship? Clearly not Salman as he pole vaulted over what she considers her boundaries.

Yes, if you’ve entered the Bigg Boss house you obviously have no real regard for personal space. Otherwise you wouldn’t agree to let yourself be on camera for 24 hours with the nation as Peeping Toms. But there’s still something known as giving consent – even to a joke.

Too bad someone like Salman Khan, who is a role model to God knows how many men in India, blithely sends out mixed messages on his show first berating a man for not standing up for his relationship with a woman and then turning on a woman for not playing along with his idea of a joke.

Disclaimer: Bigg Boss 8 is aired on Colors which is owned by Network 18, which also publishes Firstpost