I'm in a show of the Mohit Suri-directed, Arjun Kapoor-Shraddha Kapoor starrer Half Girlfriend. But it would perhaps be apt to have a credit line at the start of this film that reads: 'Brought to you by Chetan Bhagat Private Limited'.

We start off with the film staying pretty close to the book.

Riya Somani (Shraddha Kapoor) is leaving Patna, while a broken-hearted Madhav Jha (Arjun Kapoor) stays behind. He goes into flashback mode, to the time when he and Riya met at college in Delhi. 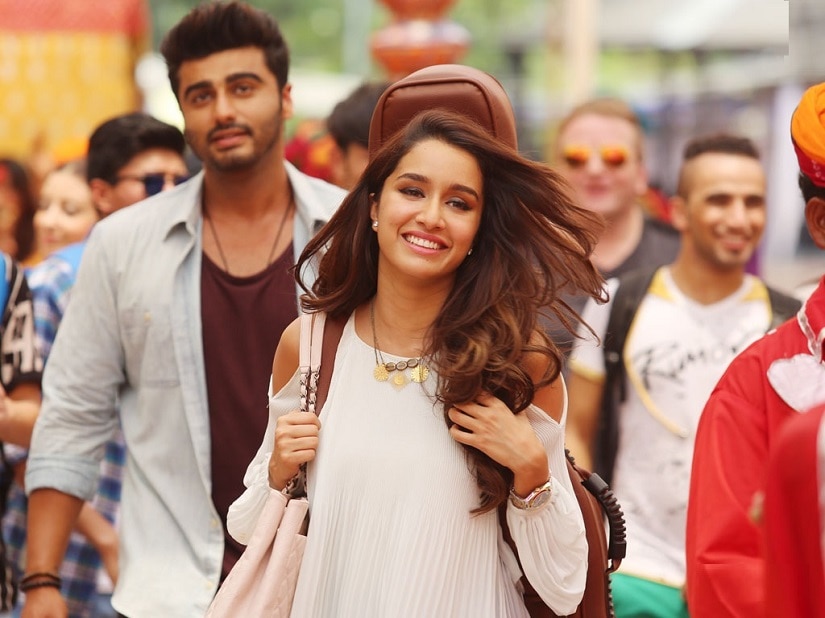 Arjun Kapoor and Shraddha Kapoor in a still from 'Half Girlfriend'

They become friends because of their common interest in basketball (although Riya looks more an R&B star than a basketball player). Riya also has a penchant for getting drenched in the rain — colds be damned (I admit, I'm envious, struggling with a case of the sniffles and a sore throat as I watch this film unfold).

When we aren't getting distracted by Arjun Kapoor's poor impression of a Bihari accent, or Shraddha Kapoor's badly lip-synced song numbers (Justin Bieber, you have nothing to fear!), we find out that Riya comes from an abusive family. In Chetan Bhagat's book, she is shown to be a victim of sexual abuse, but the film eschews this plot element to depict her father being violent towards her mother. Riya, meanwhile, seeks escape by strumming her guitar. Her dream is to be a jazz singer at a club in New York City.

Madhav, meanwhile, is shaping up to be a far more relate-able character than in the books, where he comes off as an ass more often than not. He's shown struggling with the sense of inferiority the English-speaking elites impose on him because of his origins and accent.

Just when you're beginning to warm up to him, we see the "Deti hai to de, varna kat le" dialogue from the book unfold in glorious relief on the big screen (loosely translates to "f**k me, or f**k off"). Yes, it's every bit as crass as you might imagine, and then some. Madhav hits on a sleeping Riya by getting all touchy-feely with her. He says those aforementioned words too, and physically assaults her. It's sickening and thoughtless that this scene has made the cut in the film.

Naturally, they break up. We see that Riya is preparing for her wedding, while Madhav broods (or sulks) in a corner.

Madhav returns to his village (of which he is the prince, no less) and continues to miss Riya, three years after their separation. He decides to devote his life to worthwhile causes, like improving the village school, and taking up English lessons so he can get a grant from the Bill and Melinda Gates Foundation.

Surprise, surprise! (or not so much if you've read the book; this is a pretty literal adaptation of it) who should walk back into Madhav's life, but Riya! But this is a Riya who is suffering from cancer. And so she leaves our sad hero, once again, nursing his fresh wounds.

This is where Half Girlfriend leaves us at halfway point.

If the first half of the film plays out like the regular love story, then the focus shifts to the language problem in the second half.

Madhav and his Bihari accent don't play as big a role in the proceedings thus far, but now it does come into the foreground. Not knowing English proves to be a huge hindrance for Madhav.

The film also suffers from pacing problems — it progresses in short bursts, then completely changes course. It makes the characters emotionally un-relate-able and distant. The dialogues are clichéd. At times, Madhav's bromance with his roommate seems way cuter than his romance with Riya. And the emotional moments are unintentionally funny. Post-interval, Madhav and Riya's characters seem more developed, and mature, but they're still pretty much following what's in the book to a T.

There are a few genuinely funny moments when Madhav tries to understand or translate what Riya's saying, in his Bihari accent.

Half Girlfriend does try to deal with feminist themes: like Riya walking out of an abusive relationship, Madhav ensuring that girl children in his village receive an education — but that 'Deti hai to de' scene lingers like a bad memory.