Anubhav Sinha may have 'found his voice' through social dramas like Mulk, Article 15, and most recently, Thappad. But let us (or him) not forget his humble beginnings. He started off as that dewy-eyed filmmaker who was high on the basic stuff, much more than societal issues.

A trip down the memory lane (or an IMDb check) would tell you he is the director of the Tum Bin franchise, but his 'best' work lies between the romantic sagas and the social dramas. This piece is an attempt to celebrate the filmmaker he was.

Cash - My money is on Shamita Shetty

Thirteen years ago, a mob of hands advanced towards Benjamin Franklin as if to grope his face (or something). Some early social commentary by Sinha?

In the title song of Cash (music by Vishal-Shekhar and sung by Sunidhi Chauhan), three men and two women showed in a heist drama how they plan to set the records straight for the British colonisation in India (Shashi Tharoor would be proud). But what ended up when the dust settled was nothing short of a farrago (Shashi Tharoor will be prouder).

After all, look at the stellar lineup of actors in Cash. Firstly, there is a young Ajay Devgn. Yes, young to the extent that he has just come out of the egg (in fact, some feathers can be seen on his head. Oh wait, that's hair colour). Devgn's dedication in these movies was unparalleled.

Then there is Riteish Deshmukh before all the Housefulls, Dhamaals, and Golmaals (wait, he isn't in that one). And of course, Zayed Khan, piggybacking on Shah Rukh Khan assuring him for years with a "Main Hoon Naa." But the shining star was obviously the woman of the hour...

No, not you Esha Deol.

It was the iconic Shamita Shetty.

She may have joined Uday Chopra now, as an alumnus of Yash Raj Films, owing to her current invisible status. But she was the YRF poster girl once, with hits like Mohabbattien and Mere Yaar Ki Shaadi Hai (remember, 'Sharara Sharara'?). She saw a revival-of-sorts with Sinha's Cash, and its irresistible songs, from the title track to 'Mind Blowing Mahiya.'

Her moves in both the songs were impressive, especially because she made Devgn (with brown traces in hair and a body-hugging pink T-shirt) look good. We love you Shilpa didi, but li'l Shamita must have surely made you J with these songs.

As we leave you with an indelible memory of Shamita twerking to these songs, here's the video of the song:

Two years before Sinha set the Cash registers ringing, he made Dus. Really, he should have counted till 10 before the idea (?) of Cash came to him.

But in Dus, there was the coolth of Abhishek Bachchan that jammed with the coolth of Zayed Khan like a ball of fire. Abhishek was indeed the proverbial 'mind blowing mahia' for Zayed in this film. Both their schools of cool (one measured, the other out-there) made 'Dus Bahaane' a cult song.

In retrospect, what makes it an even better song is its reboot. Vishal-Shekhar, the composers of the original, objected to the reboot, and ended up making the rehashed version themselves. That just amounts to a classic example of pair par kulhadi maarna. But the visuals of Tiger Shroff and Shraddha Kapoor making a fool of themselves in the new version ended up salvaging the glory of the original one, and making it more memorable than it already is. One big double-high five from two new nepo kids to the two OG ones.

Also, let us acknowledge the don't-turn-off-the-music appeal of 'Deedar De,' which had a token white woman appeasing the Indian male gaze as was the trend till Nora Fatehi became a permanent fixture.

In 2011, Sinha did a Rakesh Roshan when he made an Indian superhero movie. His hero was Shah Rukh Khan, playing a blue-eyed robotic messiah. But more than the blue, what got our attention was Kareena Kapoor Khan, swaying like only she can in 'Chammak Challo.'

But let us remember: Much before Sinha redeemed his choices with a Kareena, there was a Shamita Shetty. Similarly, prior to the song-less solemn films like Mulk and Article 15, there were underrated gems like Dus and Cash. 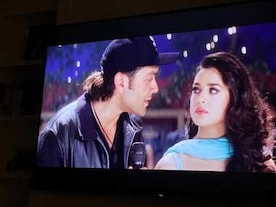