The dawn of new leadership smiles down on the Bigg Boss house as the housemates are prepping up to crown their new captain. The Luxury Budget Task – 'Lock Down' is over. The housemates wake up the next morning to the tunes of the song Aa Dekhen Zara. As VJ Bani nears the end of her stint as the captain of the Bigg Boss house, Karan Mehra,  Rohan Mehra,  Rahul Dev and Lopamudra Raut are now competing for the coveted position. Since Rohan’s team was the winner of the 'Lock Down' luxury budget task, Bigg Boss tells Rohan that only the members from his team can participate in the next captaincy task, and out of the six members, only four can take part. Rohan is asked to strike off two names from his team so he chooses Bani and Lokesh who get upset and find the decision unfair.

The first captaincy task happens between Lopa and Karan. They have to balance a pot on a seesaw on one leg, while making sure that the seesaw is in a linear position. Nitibha is appointed as the supervisor for the task. Heated arguments kick off when Bani keeps discouraging and irritating Lopa in the task by saying that she was doing it all wrong and that they have already decided the captain. “We know who we want as captain,” Bani keeps saying this to irritate Lopa, who tries her best to ignore the distraction and sticks to her task. Manu and Manveer clearly support Lopa in the task.

Rohan and Rahul compete in the second task. The task requires both the competitors to be  draped with cellophane sheets from shoulder till below the knees. Both the contestants are asked to choose one supporter each (Rohan chooses Gaurav while Rahul chooses Lopa), who will drape the sheet on the opposite team.While lying on their backs, the two had to race by either crawling or jumping to reach the finish point. The contestant, who reaches the finishing line first and stands successfully, wins the task. Lopa and Rohan win their respective tasks, after which the housemates are asked to vote and select the new captain between Lopa and Rohan.  Rohan gets maximum votes and is elected the captain of this week. Since Nitibha and Om Swami's performances were proved disappointing in the Lock Out task, both had to choose one name for captaincy and they opt for Rohan. Consequently, Lopa loses captainship by a whisker.

The verbal spat between Bani and Lopa continues. Bani lectures Lopa while the latter is cleaning the washrooms. After observing Lopa for a while, Bani pokes her by asking her to clean the corners properly. Lopa retaliates by telling Bani that she does not need a supervisor. After exchanging heated words with Bani, Lopa goes on to have an entertaining conversation with Om Swami. Swamiji continues to amaze everyone as he tells Lopa and Gaurav about reincarnations, including his own. Lopa leaves the discussion in between but Swamiji gets into an argument with Gaurav when the former expresses his discomfort over talking about such issues. Later, Mona Lisa, Manu and Manveer talk about Bani’s spat with Lopa and Mona. They go on to ask Lopa to spell out her side of the story.

As a captain, Rohan starts shuffling the household work of every housemate. He then shifts Lokesh’s bed which does not go down well with her. As a result, she bursts into anger and starts yelling at Rohan. During the recent luxury budget task, a massive fight ensued between Rohan and Manveer and now the Yeh Rishta Kya Kehlata Hai-fame actor gets  into series of arguments with Lokesh though they have been quite fond of each other.

Manu and Manveer feel that the new captain Rohan was getting influenced by Bani as they are on very good terms.  Meanwhile, the relation between Bani J and Gaurav Chopra takes different turns each day. While in one moment it appears strained and they are seen arguing with each other, the other moment they are joking around like nothing happened between them. Recently we saw how Bani got Gaurav to write his matrimonial ad, which was quite funny.

But all good things do not last long as they get into another major tiff. Bani has been quite upset with Gaurav’s agitated behaviour for a couple of days. The tolerance reached its saturation point yesterday and Bani got pissed at Gaurav while speaking to him in the kitchen area. Justifying himself, Gaurav pointed out that Bani does not listen when he talks. Trying to avoid a confrontation, Gaurav attemps to walk away from the situation which bothers Bani. This further results in some nasty name-calling. Bani’s behaviour leaves Gaurav shocked. Well, no surprises there.

And towards the end, all hell break loose when Rohan has to punish two contestants and send them to jail. He chooses Manu and Manveer, who refuse to obey the new captain’s orders. “I only listen to my father and nobody else,” screams Manu. Lopa also defends Manu and Manveer resulting into a major showdown between Manu, Manveer and Lopa against Rohan.

In tonight's episode, we will see Mona feeling a little low. As a good friend, Manu will walk up to her, but instead of consoling her, he will give an altogether different advice to the Bhojpuri actress. Manu will be seen telling Mona that she should eliminate herself from the Bigg Boss house, reasoning that Mona isn't happy in the house. He will add that for whatever reason Mona has been on the show, has anyway been fulfilled. Hence, she should opt for a self-elimination.

Will Mona opt out of the show? What other kind of revelations await us on the show? Watch this space for more. 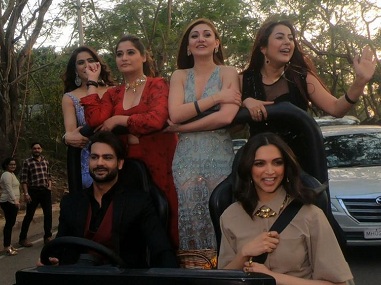