Big Mouth: My Furry Valentine — Netflix turns the provocative into profound in this pubescent comedy

Rarely has a show this smutty moved me this deeply. Big Mouth is not a show whose stomach-squirming disgustingness needs to be reviewed in a mere article. But it should be discussed, in great detail, for hours at the Geneva convention. 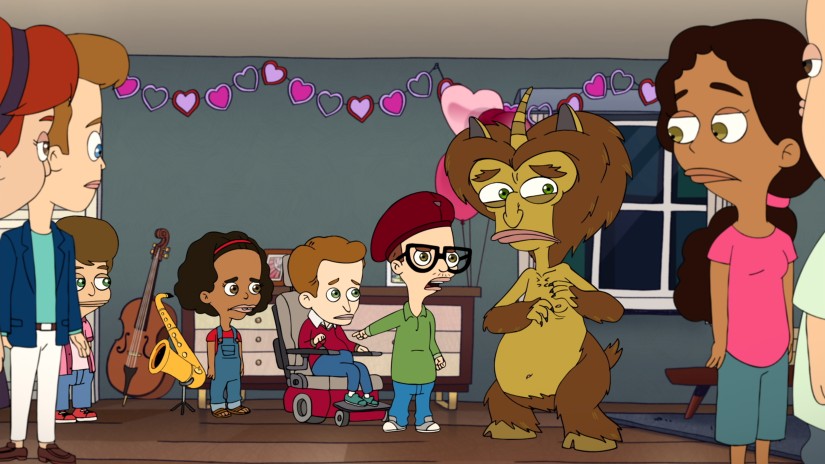 The smuttiness of Big Mouth is set around teenage years, but it is also universal. It takes place within and around a couple of hormonal boys in an American high school, but within that compass it contains humanity, philosophy, heart, tenderness, love along with commentary on racism, sexism, redemption, a shoal of dick jokes that are somehow perfectly balanced by clearheaded feminism. And also a few monsters that control teenage hormones, a wizard that fuels shame, a ghost in the attic, and cushions that can talk and have babies.

The show is co-created by Nick Kroll, a comedian who has done a fair bit of work under the shadow of the Rogens and the Apatows over the last decade, but really storms to the scene by voicing not just the main character but also a bunch of others. He isn’t as versatile as Seth McFarlane, but the similarity in some of the voices oddly work in the show's favour. The story follows the zany adventures of Nick (Kroll) and his buddy Andrew (John Mulaney) as they navigate puberty, the threat of tingly nipples and accidental boners, the amazingness of having girls as friends, and discovering that adults could be just as incapable of dealing with emotions as children.

My Furry Valentine, the Netflix V-day two-parter special, arrives in between seasons like an angel swooping from the sky with a bowl of cold water when you’re stuck in the Sahara. Incredibly, the writers have managed to make this not just a fantastic follow-up to the second season and a lead-in to season 3 which begins later this year, but also a great primer for those who have never seen the show. You could simply not know anything about Big Mouth and dive right in, fall in lust with it and head over to season 1. And whether you’re sitting at home pathetically alone in your boxers with a bowl of Cheetos on Valentine’s Day or you’re on a Netflix and chill date, or even married – there’s something for everyone here.

Before I describe the action any further, let me better set the scene. My Big Furry Valentine has a moment where a character is on a menage-a-trois date with his bed pillow and his sofa cushion. Normally, this would seem like low-brow comedy material but what happens to the character is profound: he realises that it is important to not replace life’s inadequacies with sex and it is better to look inwards and fill psychological voids with genuine emotion and human connections. Moments like these are scattered throughout the show, lending unexpected poignancy in absolutely disgusting chuckle-inducing situations. It is in fact quite commendable how the show makes light of how society often perceives some things as ghastly even though they should be normalised and spoken about as commonly as groceries. Another still from the Valentine's Day special. Netflix

Those into romcoms will quickly notice the episode is referencing elements from a famous Billy Crystal-Meg Ryan movie. Satirising When Harry Met Sally is the most obvious route to go when making a comedy on V-day, but Big Mouth does it in its own unique way. The cutaway interviews contain the hormone monsters discussing their relationships with the teenagers, and the big O-scene serves as a bookend to a boy unable to contain the excitement in his tits during lunch. Again, the moments are elevated by the sheer depth of the exploration on how confusing and chaotic things are for the young. One of the hormone monsters has a nose that is shaped like a penis, but the things that he says are something out of a Camus novella. A bittersweet song and dance number postulates that we’re all going through changes, and because we are often vilified for following our instinct and making mistakes, we tend to ignore our instincts and make even bigger blunders.

One prong of the show scythes through a topic you seldom think about: the entitlement of nice guys, who expect all the benefits of love and affection just because they’re nice. This is the moment that the show goes briefly, but truly dark, and also differs from most movies and TV shows because they often inculcate the lie that inherent goodness in humans, especially children, always ultimately wins. Embedded cultural ideas like these are persuasive to us, the audience. We have a romanticised notion of parents being the one responsible for how a child shapes up to be — to learn all the good things. But as Big Mouth shows, there’s no escaping the Shame Wizard who makes you believe that what happens to you is not the problem, but you are the problem.

Oddly we dive into risqué shows like these for an escape, and Big Mouth — in between the hilarious moments and its myriad genital imagery — lets existential thoughts invade our minds. It is easy to fall into its premise and be amused by is filthiness, but also moved by the timelessness of its message: to be a kid is no longer pleasant if one doesn’t accept the waves of change as our centre of existence.

Adult animation shows like Family Guy and South Park have an inclination toward extreme comedy through frank sexuality, but it is usually represented as human behaviour in a wide-angle lens; Big Mouth does it in a close up, and all the shocking elements in it are context, not subject. And every time, there’s a conflict, the characters, like most of us young or old in some way, bring it upon themselves in the most embarrassing ways, simply because our hormones are our lifelong agents of chaos.