Even as we negotiate the unprecedented viral pandemic which has now affected a million people across the world, literary and artistic creations from the past have assumed new meanings and new resonances. As cultural historians we need to reread these ‘texts’, if not for their formal qualities, but for their content, message and philosophical implications. A play by a 19th century playwright from Norway, its filmic interpretation by a 20th century Indian filmmaker could be an insightful case study.

In the film, Ganashatru aka An Enemy of the People (Satyajit Ray, 1989), a conscientious small-town physician Dr Ashok Gupta suddenly observes unexpected cases of a viral gastrointestinal disease among the populace. The doctor, being familiar with the town and its civic problems, manages to pin down the source of the epidemic to the ritual holy water served in the local Hindu shrine. He realises that the holy water is contaminated, and the contamination is due to a faulty plumbing in the temple. Keen to stop a potential epidemic from spreading, Gupta urges people to shun the holy water till the epidemic is contained but ends up stirring a hornet’s nest of civic apathy, corruption, bribery and fanaticism. The people who benefit from the civic corruption, including his brother, turn against the doctor. Overnight, the honest and upright doctor – a servant of the people turns into the enemy of the people. Threats are issued, and his home is vandalised by members of the community who label him as the foremost public enemy. 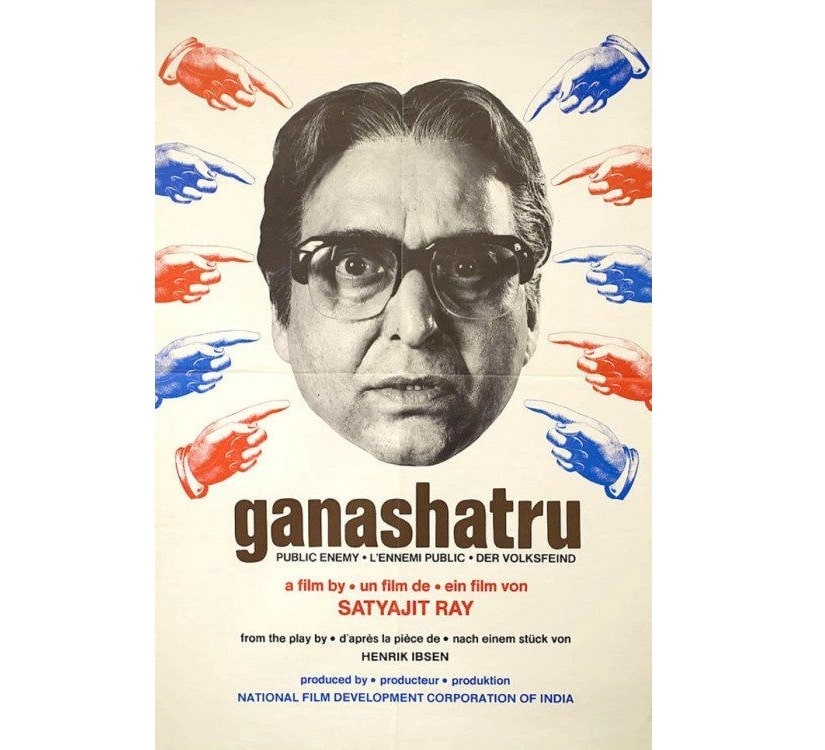 Ganashatru was among the last three films of Ray, often seen as being devoid of the mastery of the film form one sees in his earlier work. After a serious heart ailment in the early 1980s, Ray was writing studio-based scripts, as health issues prevented him from filming on locations. Ganashatru suffers from this lack. It is devoid of Ray’s signature visual style and is largely dialogue-based and static. The art direction did not have the mastery of Bansi Chandragupta, Ray's long-time collaborator, who died in 1981. Moreover, the film was adapted from an 1887 play by the Norwegian playwright Henrik Ibsen called En Folkefiende, (also translated as The Enemy of the People) and was intrinsically dialogue driven. The play was published 102 years before Ray’s film and thus belonged to an entirely different era. This five-Act play is about a physician Dr Thomas Stockmann who realises that the water of the famous spa in a small town, where he is posted, is contaminated by harmful bacteria. Stockmann intends to publish an article about this in a local newspaper, but his brother Peter, the Mayor of the town is dead against it. Peter and his cohorts try to convince the doctor that negative news about the spa will ruin the town’s economy, but then our doctor is a man of principles, but more importantly a man of science. He will not compromise when it came to the fundamental well-being of the community. Thomas’ principled position results in an assault on his credibility, as well as in a violent attack on his house. His home is vandalised by members of the community who label him as “the enemy of the people”. The play ends on a defiant note. Coaxed by his brother to leave the town for a few months, Thomas holds his ground and vows to keep the crusade on. He observes that he is the strongest person in the town, as, unlike others, he is fighting alone.

Around the world – doctors, media people, scientists, and social workers are fighting against obscurantism, misinformation, and sometimes dangerous instances of blind faith. People who critique ‘official’ versions on the COVID-19 pandemic, act as whistleblowers, and expose corruption are getting labelled as enemies of the society. The powers that be are coming down on them with a heavy hand, sometimes aided by law. I am reminded of Li Wenliang, the Chinese doctor who first attempted to warn the People’s Government about the perils of the virus which was first observed in Wuhan in China. Wenliang, who was officially “reprimanded” by the Chinese government, is the 21st-century version of Ibsen and Ray's brave protagonists.

Both Ibsen’s play and Satyajit Ray’s filmic adaptation has gained new relevance in the backdrop of the pandemic. While communities across the world have embraced the scientific principles to counter the pandemic, there are dominant pockets where scientism has been in confrontation with local belief systems. Religious leaders have come out with confusing messages, discouraging people to congregate in religious spaces, but at the same time invoking divine power as the most potent protection against the virus. Instances of such messages abound – a highly popular Protestant preacher in Ethiopia, a Hindu-right wing politician in India, orthodox Shiite leaders in Iran. For these faith leaders, it is divine intervention, rather than a proactive state machinery, an efficient and well-equipped heath system, and a scientific temperament, that is seen as the key to survival in the world under the grip of the pandemic. It is abundantly clear that it is science and science alone which can help us understand how the virus behaves and what we need to do to protect ourselves from it. Faith, at best can act as a palliative for the soul. Admitting this point in seen as a form of acquiescence to rationality and empirical knowledge, which conservative religious leaders abhor.

The conflict between faith and scientific modernity which linked Ray’s film with its ‘mother text’ – the play En Folkefiend by Ibsen, remain highly prescient even to this date. Like Ibsen, Ray kept the plot of his film open-ended. We do not know whether Dr Gupta or for that matter, Dr Stockmann won in their battle against religious orthodoxy and corruption or how quickly the epidemic was contained. But contemporary experience tells us that the system is always quick to shoot the messenger, rather than heed their warning. We could, however, draw some comfort from the fact that the Chinese government offered a “solemn apology” to the family of late Dr Li Wenliang. The “enemy of the people” was right after all. Coronavirus Outbreak: Chess plays on while other sports struggle to cope with COVID-19 pandemic