Aruvi actress Aditi Balan on her preparation for the role: 'I lost 10 kilos, isolated myself for 45 days'

Aditi Balan, the debutante actress who played the lead role in the Tamil emotional drama film Aruvi, has been getting a lot of accolades for her riveting performance in the film.

“I never dreamt I'd become an actor; everything came by chance. Just like any other movie buff, I’m a huge fan of watching emotional dramas. Post my law degree, I took a workshop session to gain theater experience and did a couple of plays. A friend from the theater suggested I attend the audition of Aruvi and within a few days, they conducted the test shoot and signed me for the role”, says Aditi Balan in an exclusive interview to Firstpost. Aditi Balan in a still of Aruvi

Answering the question on the similarity between Aditi and Aruvi, her character in the film, she says “You should ask this question to the director. But after the initial round of auditions, everyone in the team thought I have a few characteristics of Aruvi. But I would say Aruvi changed me a lot as a person, the way the character spreads love had a huge impact on me”.

In the film Aruvi, Aditi’s character shares a great rapport with her dad in childhood. “I’m an Appa ponnu (dad’s girl) in real life. In fact, my dad and I fell for the script because of the emotional bond between Aruvi and her dad. The script was so strong, I couldn't say no," adds Aditi.

Aruvi has a topical theme on how society treats HIV patients but unfortunately, a couple of leading heroines rejected the script. “I had no inhibitions because the script had a debate on the various perspectives and the narration was very powerful," says the actress.

There is a lengthy dialogue in the film throwing light on the materialistic world, and Aditi reveals that it was a single shot. She says “After the script reading session, the first thing I did was prepared that lengthy dialogue. I always knew that if I pull off the particular scene, rest of the things would fall into place".

Talking about her director, the actress said, "Arun actually discussed the script with everyone in the team and asked how each person would be reacting to the particular scene. As a team we encouraged each other, it’s a collective effort”. For Aruvi, the entire team had three months of rehearsals and spent a lot of time in the pre-production.

Aditi also had to undergo a lot of physical changes, especially for the climax. “For the last episode of the film, Arun asked me to prepare and promised me that he would start the shoot only when I’m ready. I had a grueling diet to lose 10 kilos and also isolated myself for 45 days without talking to anyone for the climax portion of the film. It was exhausting, both physically and mentally but I loved the challenge”, says Aditi on the herculean effort for Aruvi.

Recently, Superstar Rajinikanth watched the film and spoke to the film's director for nearly twenty minutes. "Aruvi made me laugh, cry and think about many things in life. You have a very big future and people would talk about this film for years. A great job indeed", said Rajinikanth.

On the overwhelming response, Aditi says “After the premiere show, the media praised the film but what really moved me was common people from different walks of life appreciated me for the performance."

So what's next for Aditi? “I’m waiting for right scripts but directors should come up with films which are as challenging as Aruvi," she smiles. 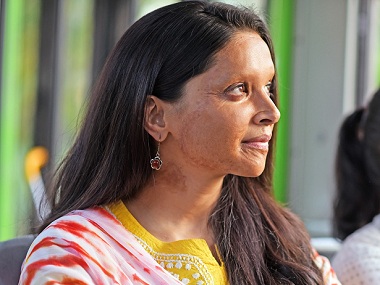