Arjun Reddy: How Vijay Devarakonda's film is a nod to toxic masculinity

“Watch Arjun Reddy now!” said a friend last week — almost with an intensity that made me question if our friendship would survive if I didn’t comply to his demands. The relatively low-budget film starring Vijay Devarakonda created quite the stir in Hyderabad within a day of its release. “Path-breaking,” said another friend. “Heralds a new chapter in Telugu cinema,” wrote another friend. And soon enough, a frenzied appreciation for the film spanned across Telugu film industry scions and among various critics. And that frenzied appreciation has translated into a Rs 30 crore box office collection in the first week itself.

As I sat through the three-hour-long film, I wondered if I was in the minority that felt that Arjun Reddy left an unpleasant aftertaste in the same way that the Karthi and Aditi Rao Hydari starrer Kaatru Veliyidai does. The ‘leaps and bounds’ that many have claimed that this film has has made — much like the 17 kisses in Mallika Sherawat starrer Khwaish had been described as — in the industry are farcical. Sure, there is a certain narrative style in Arjun Reddy that has never been seen in mainstream Telugu cinema before. Even conceptually it foregrounds the story of the titular protagonist — it is meant to be a story about Arjun Reddy, his life, love, loss, pain and suffering and nothing else. At at any given point, he is meant to be the only person who matters in the frame: only Arjun Reddy matters, everyone else in the film is there to foreground his story.

At its core, the film is about pain and suffering that comes from a broken heart. It’s supposed to be raw and intense, but I was left wanting for the unlayering of those emotions as some critics have claimed it was successful in doing. Other than being willing enough to showcase a fully grown man embracing his tears (which is a strange contradiction when Arjun’s friend’s casually says that ‘boys shouldn’t cry), the film falls into the very trap that it was perhaps trying to avoid. In envisaging a new raw intense masculinity, it appropriated the very masculinity it hoped to replace.

A brilliant medical student, an all-rounder of sorts, Arjun Reddy has a fatal flaw. He gets angry too fast and too much. Yet that flaw, though acknowledged by everyone, has a life of its own and fetishisied to a distinct measure of the absurd. Everyone in his college reveres him, he has a cult-like following. Almost everyone in his life is afraid of him, even his friends. He, in most occasions is unable to control his anger. If anything, that’s his USP and gets absolute sanction from those around him. The depiction of anger/insolence/and ‘free spiritedness’/’does as he pleases’ as some form of alpha male attitude/attributes is deeply problematic.

In Kaatru Veliyidai, VC’s ruthless attitude towards the women only gains him a moniker of being a troublemaker or that of an ‘attractive bad boy’. Here, Arjun’s ‘I couldn’t give less f****’ attitude, short temper and his obsessive and impulsive love towards a woman earn him respect, kudos and at times absolute reverence and compliance. Arjun and VC — both complicated characters — aim to be representative of the new definition of ‘alpha male’ but they both fall short of doing so because of shallow characterisations, little to no character growth. 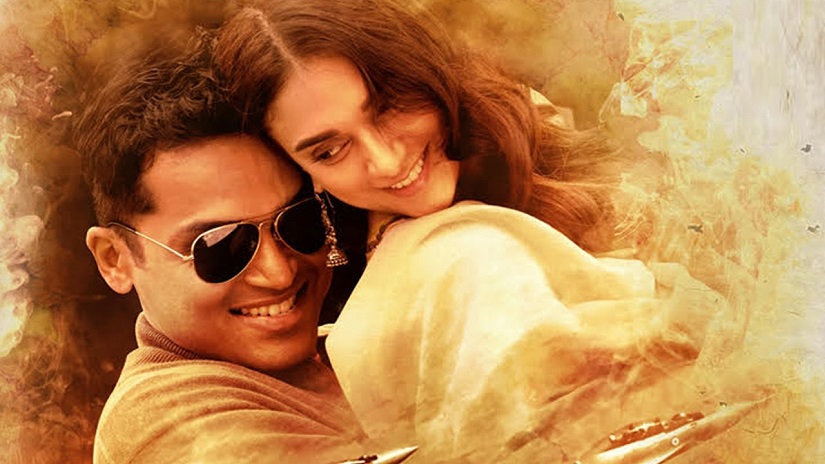 In both films, there is a desire to show the untamed — the beasts and demons — that exists within the recesses of our mind, but those desires rarely translate onto the screen without coming undone. Arjun’s passions, his desires and his wants and needs and the very rawness (which Devarakonda does more justice to than any of the current crop of so-called superstars put together) remain in the realm of the abstract. I have an understanding that there is something more in the layers, the avenues to reach those layers, however are blocked, by (probably an inadvertent) glorification of the masculine and the toxic.

Arjun’s understanding of women is problematic and his relationship with women, even more so. (And any redemption that was made through the scene where he tells off a guy for objectifying airhostesses later on in the movie doesn’t come through in the way it should have). Arjun sees Preethi (Shalini) in college and is instantly drawn to her. The first thing he does is go to a class threatening the other boys in the college to not rag her or even look at her, because she is his. And tells his classmates that the other girls are ‘free for all’. Oddly reminiscent of how you claim your right to property. The next thing he does is watch her play Antakshari with some classmates, asks her to come to him and lands a peck on her cheek. The question of consent gets thrown into the deep abyss of misogyny.

Sidenote: For a supposedly ‘revolutionary’ movie, the outdated and deeply problematic idea of ‘love at first sight’ is a sad trope of choice.

In another instance, Preethi gets molested by a group of men with whom Arjun has an on-going feud. He beats them up and yells, “Tumhare ghar mein aake tumhare behen ma ko chede toh?” It made me wonder if Arjun would have given a single f*** about women who weren’t related to him or somehow connected to him. There is no agency extended to Preethi’s character, there is only Arjun who infantalises her and takes on the largely self inflicted burden of protecting her. As mentioned before, I do have an implicit understanding that nobody other than Arjun is the story. Preethi is not the story, she does not have to be the story, but problematic behaviour getting glorified as an ideal of love reeks of an era that is not 2017. And while his own anger and impatience causes him to lose Preethi, the burden of not being with Arjun falls on Preethi.

In Kaatru Veliyidai, Leela (Aditi Rao Hydari) tells VC: “Rani madhiri nadathura illa keela pottu midhikkira (You either treat me like a princess or you walk all over me),” this came to me just as Arjun lands a crackling slap on Preethi’s face telling her that she has six hours to convince her parents about their relationship.

Stripped off the cinematography, style and treatment, Arjun Reddy isn’t that revolutionary after all, it is still a nod to the male ego.

It would have been a completely different and truly “revolutionary” for Telugu cinema to truly show the ruin that toxic masculinity brings. As Arjun hits rock bottom, there’s a glimmer of hope that perhaps this is how it will all end — in abject ruin, without amends, without any change because change is not easy and just a few words don’t make everything hunky dory again. But the film does not end that way.

For a film that’s being talked about as a ‘game changer’, I wonder: Has it really changed any game? He finds his lost lover after 8 months, fully pregnant and wonders if she would want him back. That private wonderment translates into a strong ‘free spirited’ ‘bold’ will within a few days and he lands up in front of her, not asking her if she would take him back or that he messed up but that she must. He doesn’t ask, “Are you happy?”; he talks at her: “I know you’re unhappy.” And Preethi eagerly tells him that the child is his and that she never even let her husband “touch her little finger” and that they should get married.

But hey, we’re not here to tell Preethi’s story. So, what is Arjun Reddy’s point? That he made a mistake and suffered for months, operated on patients while he was under the influence of alcohol and the only penance — for all this irresponsible behaviour — is in him getting his license gets revoked? Is that enough? Is that how we’re supposed to celebrate his toxic masculinity with him? Are we supposed to congratulate him and think of his as someone who is noble and honourable?

Sidenote: Arjun almost holds a knife to a woman asking her to take her pajamas off so that he can have sex with her. Even this is not the low point in his path to ruination, it’s a scene that is used as some sort of comic relief, unable to get what he wants from her, he walks out and pours ice down his pants to down his erection.

Love, as this grand idea of pain, suffering and violence and deep hurt is a great entry point to tell a tale. A Devdas pining for his Paro leading towards his own ruin is a grand romance — it has all the elements that make you feel for Devdas, not just pity but a deep understanding of the wounds that love inflicts. Arjun’s pining for his lover quickly turns into a long whine — an entitled man-child throwing a tantrum to gain attention. For a movie that’s supposed to be about Arjun’s rise and fall and the rise again, there’s very little character development. The college student Arjun Reddy is the same as the supposedly apologetic Arjun Reddy at the end.

If this movie is ‘revolutionary’ ‘path-breaking’ or one that ‘heralds a new chapter in Telugu cinema’, it is because it has been able to generate a discourse earlier unknown to the industry (at least since the late 1990s). For that reason maybe, it deserves some praise.

Like Kaatru Veliyidai, Arjun Reddy leaves a few questions unanswered. When does love devolve into abuse? When does boldness (and in this case anger/and the so-called free spiritedness) become misbehaviour? What does it mean when a film, through its various elements (characters, dialogues, movies) is putting forth the idea that a deeply flawed individual is actually “expressing himself” or “being free spirited”? The truth is that the lines are blurred, our lived realities are complex, how should any film then present those complexities rooted in our present social contexts?