Andaz Apna Apna sequel should not be made sans Aamir Khan, Salman Khan — or at all

It is common knowledge that Andaz Apna Apna is one of those rare films that bombed at the box office during the time of their release but went on to become cult classics eventually. This just proves that the audience of 1994 was far more intelligent than their successors as the Rajkumar Santoshi film is of no consequence.

Burdened by buffoonery, the Salman Khan and Aamir Khan starer is a forgettable film remembered for its lame humour. In fact, it is tough to fathom how the actors managed to be so invested in the mindless mayhem.

I must admit that I watched the film after I grew up, so my aversion could be paralleled to say, a millennial who watches Aditya Chopra's classic romantic comedy Dilwale Dulhania Le Jayenge after consuming dozens of films with the same template, and wonders why it ever made to the golden sections of the film archives.

But in my defense, Dilwale Dulhania Le Jayenge was loved because it was a pioneer in romantic comedies. However, Andaz Apna Apna is only a blot on comedies (Read: Teja main hu, mark idhar hai).

There have been multiple comedies that have preceded Andaz Apna Apna which have evoked much better than cringe and sighs from the viewers. Films like Hrishikesh Mukherjee's 1975 ensemble Chupke Chupke and Sai Paranjpye's 1981 film Chashme Badoor still crack me up.

The grapevine has been abuzz for years about the Andaz Apna Apna sequel. The star cast, particularly Aamir and Salman, have teased the second installment at various junctures of their illustrious career. However, now Rajkumar Santoshi has cleared the air and confirmed that the two superstars will not be a part of the film.

While the filmmaker argues that the two middle-aged stars chasing young girls would make for a vulgar act, the idea of an Andaz Apna Apna sequel without both the Khans is plain stupid. Not only because of their equity but also because they were the only good thing about Andaz Apna Apna. Not them, per say but their impeccable comic chemistry.

They looked made for each other and shared even a higher level of comfort mutually than with their respective girlfriends, Raveena and Karisma (or vice-versa). Their antics tickled our funny bones only because of the conviction they placed in each other's talents, their own and that of the director.

If there are any two characters that inch closer to that of Prem and Amar, it is Crime Master Gogo and Teja. Shakti Kapoor and Paresh Rawal's comic acts left many in splits but failed to amuse me. But that was not the case with Aamir and Salman who had an air of mischief around them.

Glimpses of that mischief can still be traced in Salman and Aamir today but Santoshi does not seem to echo the same opinion. He also reasons that he does not want to encash on the cult following of the first film.

Well, I personally think if he has come as far as dropping the two superstars from the film, he might as well put the film on the backburner altogether.

Not because Aamir and Salman are not in it. But because some films should not be touched, let alone remade. And a terrible film like Andaz Apna Apna, certainly not. 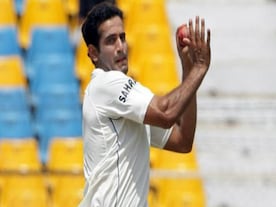