The first look of Jatin Sarna from Kabir Khan's 83 has been released. Ranveer Singh took to social media to introduce Sarna as former Indian cricketer Yashpal Sharma. He shares the still and calls him as 'gusty and glorious.' He further adds that Sharma's 'explosive willow-wielding could single handedly change the game for India.'

Sarna, who is known for his stint in Netflix's Sacred Games as Bunty, looks extremely focused in the shared still. He is batting on a cricket pitch, and is  facing away from the camera.

Early this week, the makers had shared the first look of Tamil actor Jiiva as K Srikkanth, Saqib Saleem as former Indian all-rounder Mohinder 'Jimmy' Amarnath and Tahir Raj Bhasin as Sunil Gavaskar from the film.

Sarna had told previously told Firstpost that how the film is nothing less than magic, "I can only assure you one thing that this will be the biggest film of 2020. And the kind of work put up by the director, DoP (Director of Photography), hair and makeup, costume, and the actors is commendable. Everyone has given 110 percent, and beyond that. The film is looking very authentic, which is very important. I'm very sure that it will touch millions of hearts."

Touted as the "biggest sports film" of the country, 83 is slated to be released on 10 April. 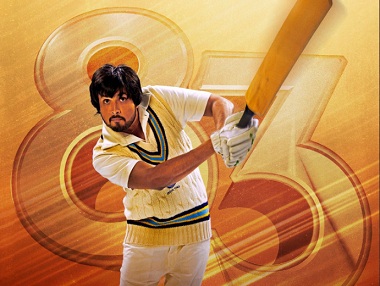