Why is India's tax-to-GDP ratio so low?

According to a report by Moody's, India's tax-to-GDP ratio, at just under 15 percent, is lower than countries with similar sovereign ratings. There are three key reasons for that.

One, structural factors such as low per capita income keeps tax collections low. "Low average incomes and a high poverty rate result in a very small portion of the labor force being eligible to pay personal income taxes. As of 2010-11, income taxes accounted for a lower proportion (10 percent) of the general government's revenue than, say, the OECD average (approximately 30 percent)," said Moody's. Two, a large proportion of economic activity that is generated by small and medium enterprises (SMEs). Although these enterprises have enjoyed strong profitability growth over the past decade, the government has not captured their earnings in tax revenues due to a variety of exemptions and compliance issues, the ratings agency said.

Three, a lack of policy initiatives has also kept the tax take low." This includes certain tax exemptions on agriculture related activity and until the mid-nineties, on most services as well. The tax net has been progressively expanded to include a greater number of services each year, and service tax revenue has grown the fastest of all revenue sources. Yet, service taxes constitute merely 5 percent of total general government revenues, although they comprise about 60 percent of GDP," said Moody's. 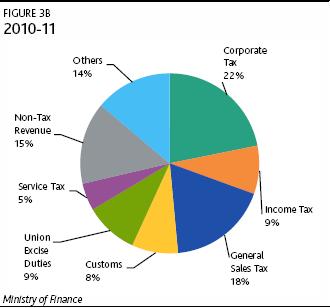 Indirect taxes also suffered from the slowdown in demand and manufacturing output, slowing from 20 percent growth in 2006-07 to 9 percent in 2007-08.

What does this mean for the future?

The trends above suggest that in the next two years, any attempt at fiscal consolidation (raising government revenues and cutting expenditure) will depend on how far corporate profits and consumption recover. Moody's expects India's tax-to-GDP ratio to recover from its current level of under 15 percent to 17 percent when GDP growth recovers and sustains at levels higher than 8 percent.

(All charts provided by Moody's)