New Delhi: Taking a different line from Delhi BJP chief Vijay Goel, party's chief ministerial nominee Harsh Vardhan has made it clear that he will not order any probe into the CWG scam and other graft charges during Sheila Dikshit's rule, if BJP comes to power after Assembly polls.

Vardhan said he would invest his energy in implementing his vision of a modern city rather than going into the past and probing the "scams" for which people are set to throw out the "corrupt government". 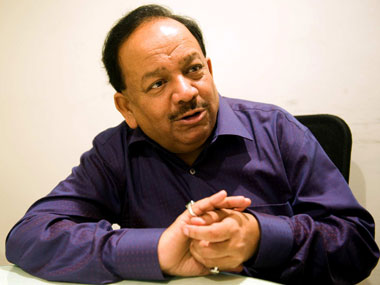 "My mind is very clearly set on what I have to do for the future of the city. What will we do with all these scams because if we keep going into all that, ultimately you lose direction. I want to do positive things," Vardhan told PTI.

Earlier, Goel had announced that all major cases of alleged graft and financial bunglings during Dikshit's rule, including CWG scam will be probed, if BJP returns to power. He had even said that an Accountability Commission would be appointed to probe various alleged scams.

"I don't want to go into the past. My vision is very clear. I will have to focus on the development of the city, attending to the problems of the people who have been suffering so much. I will focus my energy in applying modern ideas and knowledge to make Delhi a better city," Vardhan said, making it clear there will be no witch-hunt.

Coming down hard on Dikshit over the alleged scams, he mentioned the multi-crore transport scam, financial bunglings in hosting of the CWG and scam in privatisation of power distribution.

"I read each and every line of the Shunglu committee report. It directly or indirectly mentions the role of the government and Chief Minister in particular," said Vardhan.

The Delhi government, however, had strongly rejected the findings.