At 4 degrees, coldest day of season for Delhi

1 January's minimum was three degree below normal and down from 31 December's minimum of 5.5 degrees, which was the previous lowest for the season.

The conditions improved a bit as the day progressed, but with maximum dipping five degrees below normal to stay at 15.3. Mercury at the lowest and icy winds made the city colder than usual in the morning hours. On 31 December temperature, the maximum was recorded at 13.3 degree Celsius, making it the coldest day of the season so far.

Dense fog enveloped the city in the morning hours affecting road and rail traffic as well as operations at the Indira Gandhi International Airport. The visibility dropped to near zero level. 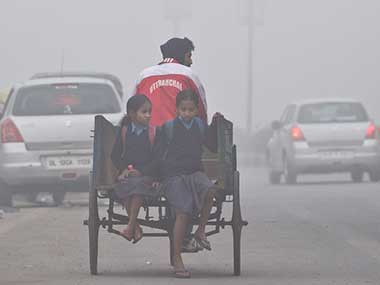 About 60 flights were delayed, 38 cancelled — either due to poor weather at destination or due to operational reasons, while four international flights had to be diverted to Jaipur and Mumbai after visibility dropped to less 50 metres, an airport official said.

The previous two New Year days were generally 'warm' for the capital with minimum temperature at above normal levels. Last year, the minimum was 8.4 degree Celsius, one degree above normal and in 2011, it was 11 degrees, four degrees above normal.

"The icy winds are making it worse. I didn't feel like coming out of the house today," said Sharmista Mathur, an executive with a accounting firm.

"The maximum and minimum temperatures would be around 16 and five degree Celsius respectively for the 2nd," the MeT department said.