By Pete Schroeder WASHINGTON (Reuters) - Facebook Inc CEO Mark Zuckerberg sought to reassure sceptical U.S. lawmakers on Wednesday that the company's planned digital currency Libra would be a force for good that could reduce costs for electronic payments and help more people participate in the global financial system. 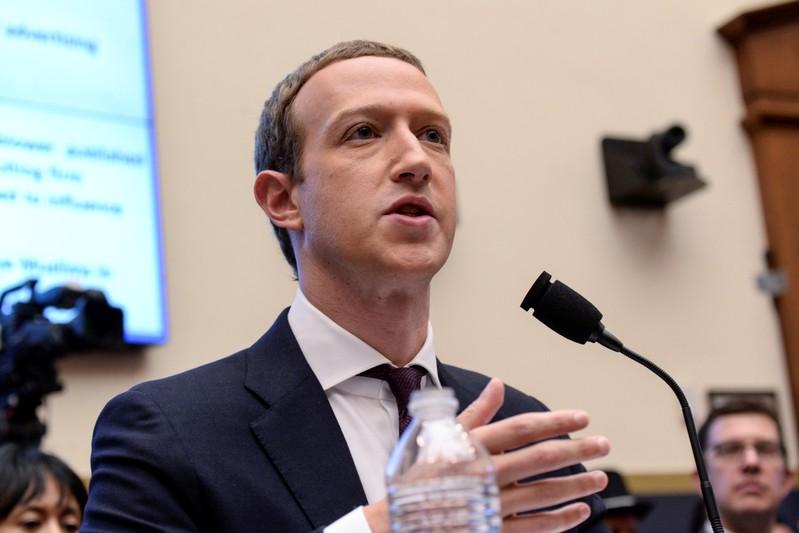 Appearing in a suit and tie before the U.S. House of Representatives Financial Services Committee, Zuckerberg said Facebook would not back any move by Libra, which comprises a consortium of 21 members including venture capital firms and nonprofits, to launch the cryptocurrency until it had satisfied all U.S. regulatory concerns.

Representative Maxine Waters, the panel's fiery Democratic chair, had previously called for the Libra project to halt its planned 2020 launch, and has drafted legislation that would bar tech companies from entering financial services.

She quizzed Zuckerberg on Facebook's steps to combat misinformation and voter suppression ahead of the November 2020 U.S. presidential election. On Monday, the company disclosed it had removed a network of Russian accounts targeting U.S. voters on Instagram, which Facebook owns.

"It would be beneficial for all if Facebook concentrates on addressing its many existing deficiencies and failures before proceeding any further on the Libra project," Waters told Zuckerberg.

Libra has faltered in recent weeks amid sustained criticism from lawmakers and regulators over fears it may aid money laundering and upend the global financial system. Several financial partners including Mastercard, Visa, PayPal and eBay have abandoned the project.

The Facebook CEO last appeared before Congress in April 2018 when he fielded 10 hours of questions over two days from House and Senate panels on political consulting firm Cambridge Analytica's misuse of Facebook customer data to interfere in the U.S. presidential election.

That scandal damaged Facebook's image in Washington and has compounded worries among lawmakers that the social media giant cannot be trusted to launch a global digital currency to its 2.4 billion users.

Zuckerberg acknowledged Facebook's mistakes but said they should not stand in the way of Libra, based in Switzerland, which would help reduce the cost of global payments.

"I get that I’m not the ideal messenger for this right now, we’ve faced a lot of issues over the past few years and I’m sure there are a lot of people who wish it were anyone but Facebook that was helping to propose this," he said.

David Marcus, the Facebook executive leading the Libra project, testified before the committee in July. He told reporters last week that Zuckerberg will be unable to make material commitments on behalf of Libra because Facebook no longer controls the project.

On Oct. 14, the Libra Association comprising 21 members agreed articles of association laying out how the organisation will be governed, as required by Swiss law. Most decisions will require a majority vote of the group's governing council, meaning Facebook will not call the shots.

Wednesday's hearing is also likely to address antitrust concerns after 46 attorneys general joined a New York-led antitrust investigation of Facebook, officials announced Tuesday, ramping up a bipartisan probe that could force an overhaul of the technology giant's business.