By Herbert Lash NEW YORK (Reuters) - World stock markets rallied for a second straight day on Wednesday, while safe-haven assets such as U.S. bonds and the Japanese yen slipped to multi-week lows on bets the ongoing U.S.-China trade spat would inflict less damage than feared. European shares gained on trade-sensitive materials and auto stocks, while on Wall Street the S&P 500 and the Dow industrials were buoyed by U.S. 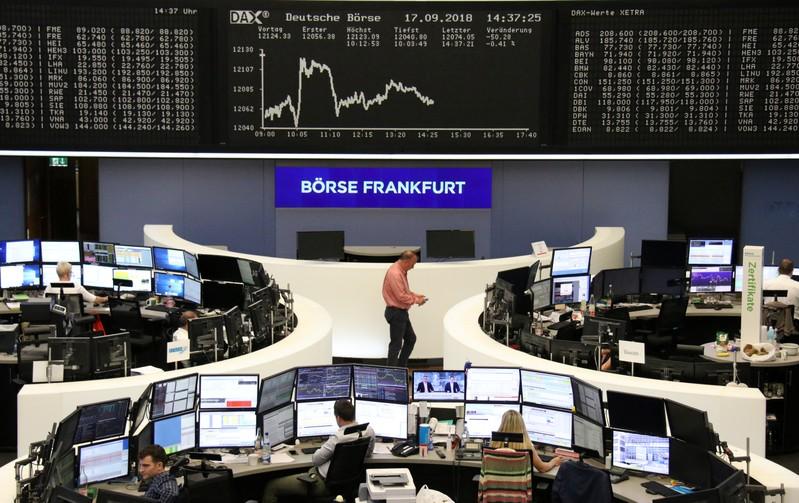 NEW YORK (Reuters) - World stock markets rallied for a second straight day on Wednesday, while safe-haven assets such as U.S. bonds and the Japanese yen slipped to multi-week lows on bets the ongoing U.S.-China trade spat would inflict less damage than feared.

European shares gained on trade-sensitive materials and auto stocks, while on Wall Street the S&P 500 and the Dow industrials were buoyed by U.S. bank stocks on the back of higher Treasury yields. The Dow hit its highest close since late January.

A drop in Microsoft

The big question for investors was whether the rest of the world will rejoin the United States in global synchronized growth or if ongoing trade tensions and tighter monetary policy finally slow the U.S. economy, said Michael Arone, chief investment strategist at State Street Global Advisors in Boston.

"That kind of dilemma is really what investors face and trade seems to be the wild card in all this," Arone said.

Investors were underestimating the boost stocks are gaining from the massive U.S. fiscal policy package that far outweighs any trade penalties that have been put forward, he said.

The repatriation of corporate profits this year is likely to be $700 billion, individual and corporate tax cuts $200 billion and the government has boosted spending by $100 billion, Arone said.

"That's $1 trillion of fiscal stimulus. I think the effects of that continue to be under-appreciated by investors," he said.

Housing starts rose 9.2 percent last month, a positive sign for the housing market which has underperformed the broader economy amid rising interest rates for home loans.

The dollar index <.DXY>, which measures the greenback against a basket of six other major currencies, fell 0.09 percent to 94.553.

U.S. oil futures rose more than $1 a barrel on a fifth weekly crude inventory drawdown and strong domestic gasoline demand amid ongoing supply concerns over U.S. sanctions on Iran. Brent crude oil held near its highest this year on concerns producers may fail to cover a supply shortfall once the U.S. sanctions take effect in November.

Bullion bounced as the dollar weakened, indicating investors are starting to worry about the impact of the U.S.-China trade war on the U.S. economy, luring some buyers back into gold investments.