Mr Mallya, why don't you return to India if you are not a defaulter?

Vijay Mallya, not definitely the King of Good Times these days, isn’t a happy man with so many recent developments. One such is the ‘media trial’ against him since 2 March—the day when he left the country with seven bags, an unidentified woman, Rs 9,000 crore loan obligation, a wilful defaulter notice and charges on financial irregularities. 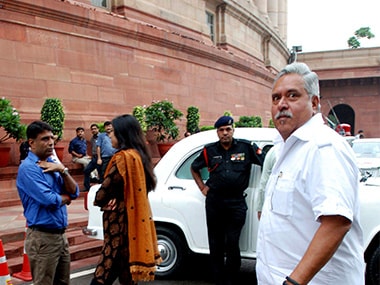 The tycoon, currently at his ‘Ladywalk’ bungalow in the suburbs of UK, tweeted on Tuesday.

“In all humility and not in defiance as they report, I would like Indian media to check and verify facts before calling me a defaulter.”

In another tweet Mallya said, “Agree Kingfisher Air owes money to Banks. I am neither a borrower or a judgement debtor. Why am I a defaulter inspite of a settlement offer ? (sic)”

The arguments Mallya seems to make in both tweets make no sense. Here’s why:

Argument 1 : Check and verify facts before calling me a defaulter/ I am neither a borrower or a judgement debtor.

True, it was not Mallya, but the Kingfisher Airlines that originally borrowed close to Rs 7,000 crore from a clutch of 17-banks. But, as this Firstpost story highlights, Mallya is being chased by banks because he furnshied personal guarantees against the loan and, for fresh facilities Kingfisher received before the loan turned into a non-performing asset (NPA).

Typically, personal guarantees are not given on specific assets of the promoter but on all his personal assets. If it is against a specific asset, it becomes collateral. In that backdrop, Mallya indeed is a defaulter and is liable to pay back the dues to the 17-banks.

Secondly, banks wouldn’t have extended loans to Kingfisher but for the big name of its promoter—Vijay Mallya. Remember, the airline never made any profit in its eight-year-old life, nor had anything else that offered comfort to its lenders as a liquid collateral. It was only because the man who was seeking money is one of the country's top industrialists that banks had faith in him. As one banker said “who would have dared to refuse loan to Mallya?”

In all humility and not in defiance as they report, I would like Indian media to check and verify facts before calling me a defaulter

Agree Kingfisher Air owes money to Banks.I am neither a borrower or a judgement debtor.Why am I a defaulter inspite of a settlement offer ? — Vijay Mallya (@TheVijayMallya) May 2, 2016

This is not to argue that banks have done all the right things. Kingfisher is clearly a case of banks’ failure to see what is coming, act early on recovery and their overreliance on the name of the airline’s flamboyant owner. By stating he is not a defaulter, is Mallya trying to distance himself from the airline?

Also, why did three banks (though one of them had to reverse the decision following a court order) tag Kingfisher and Vijay Mallya as a wilful defaulter if it is not a case of default and alleged misuse of funds borrowed from banks? Mallya indeed is the borrower and the defaulter of Rs9000 crore loans to 17-banks.

Argument 2: Not in defiance as they report

Media has no business to accuse any individual for months on end, unless there is a clear case of guarding public interest. As this website has argued for long, the Mallya-Kingfisher case is important since the Rs 9,000 crore lent to Mallya is indirectly public money. Banks run on deposits mobilized from the public. In other words, they are the guardians of public money. If banks lose money on account of defaults, banks’ profitability takes a hit. In the case of state-run banks, the onus to recapitalize banks yet again falls on the taxpayer.

Secondly, the Kingfisher case will set a trend for other similar cases in courts. Kingfisher is only one such case. Hence, media interest in this case is logical.

Mallya has been defiant in this case throughout, evident from his statements in courts and in his interviews. The tycoon said banks’ have no business in seeking his foreign asset details on account of his NRI status. despite the personal guarantee submitted by him. He even warned that government actions, including revoking of his passport, would not get any money to the banks.

More importantly, Mallya was never willing to appear before the court despite the Supreme Court asking him to do so. Aren’t these acts of defiance? If Mallya is indeed not guilty of default and fund diversions, he should have returned to the country and seek justice.

Argument 3: Why am I a defaulter in spite of a settlement offer?

A borrower is tagged as a defaulter when he defaults on his loan and gets rid of that tag only when he repays the outstanding loan amount through a mutually agreed proposal between him and the lenders. In Mallya’s case, the Rs 4,000 crore offer submitted by Mallya was never acceptable for banks for their own reasons. How does one cease to become a defaulter by merely promising repayment? Moreover, Mallya doesn’t agree that he owes Rs 9,000 crore to banks (including the interest accrued on principal). He has always contested the figure as unfair, saying banks have charged compounded interest on the principal amount. What if all borrowers in India say the same and refuse to pay the interest component?

Mallya is an industrialist, who was once the poster boy of Indian aviation and someone who introduced luxury flying experience in the domestic aviation sector. At one point of time, he used to be, certainly, the pride of many Indians and all that represented luxury in life. Why did he let himself fall to where he is now?

If Mallya wants to clear his name, he should return to the country, pay his dues and fight the charges against him in a court of law.

The questions to Mallya are:

Over to you Mr Mallya.