A Reuters report had said last week that while India criticised Moody's ratings methods and pushed aggressively for an upgrade, the U.S.-based agency declined to budge citing concerns over the country's debt levels and fragile banks. Winning a better credit rating on India's sovereign debt would have been a much-needed endorsement of Prime Minister Narendra Modi's economic stewardship, helping to attract foreign investment and accelerate growth. 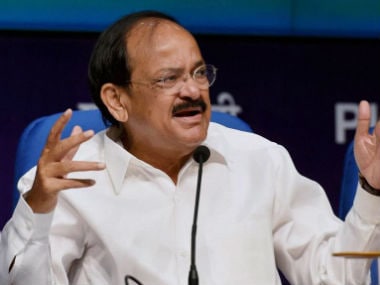 Previously unpublished correspondence between the Finance Ministry and Moody's shows New Delhi failed to assuage the ratings agency's concerns about the cost of its debt burden and a banking sector weighed down by $136 billion in bad loans, the piece went on to say.

On November 16, Moody’s affirmed its Baa3 issuer rating for India, while maintaining a positive outlook, saying the government's efforts had not yet achieved conditions that would support an upgrade.

“Any agency rates on the basis of information available. What’s wrong if we gave information, placed facts before this agency? Rating is still done by them,” Naidu said while addressing media on achievements of two-and-a-half years of the Modi government.

In letters and emails written in October, the finance ministry questioned Moody's methodology, saying it was not accounting for a steady decline in the India's debt burden in recent years. It said the agency ignored countries' levels of development when assessing their fiscal strength.

Rejecting those arguments, Moody's said India's debt situation was not as rosy as the government maintained and its banks were a cause for concern.

To another question on whether the Rs 2000 note will be withdrawn soon, Naidu said that concerns over this note being misused and RSS ideologue S Gurumurthy’ suggestion that it be withdrawn “will be kept in mind”. Does this mean the government will take Gurumurthy’s advice and put this particular currency denomination out of circulation soon?

This piece quotes an interview Gurumurthy gave to a television channel to say that the Rs 2,000 note was introduced only to meet the demand-supply gap after Rs 500 and Rs 1,000 notes were sucked out of circulation. And that the banks would be asked to hold back Rs 2,000 notes and replace them with lower denomination notes eventually.

Naidu gave out many statistics to buttress his assertion that the two-and-a-half years of the Modi government have been more productive than decades of Opposition rule.

The General insurance industry saw 29 percent growth with premium collection of Rs 9162.81 crore for the month of November.

Rabi sowing increased by 6.37 percent, number of foreign tourists was up by 9.3 percent and foreign exchange earnings increased by 14.4 percent this year

14.7 lakh houses approved under PM Awas Yojana. The minister is also known for coining catchy slogans on the go and he did not desist today from doing so. At various points during the interaction, he coined slogans like

Demonetisation is an anti-scam vaccine

It is our endeavor to transform this Desperate India to a New India.

From red tape earlier to red carpet (for investors, under the Modi regime)

We want to create white money, opposition wants a white paper (On demonetisation)

In reply to a question on government’s lacking focus on the entertainment sector, Naidu immediately referred to Aamir Khan starrer ‘Dangal’ which has reported high box office collections since its Christmas release, in India and abroad. It is a little ironic that the minister chose to quote collections from a film where Khan is the lead, given its reported antipathy to comments this actor made sometime ago.

This story says e-commerce major was forced by people associated with the ruling party to end Khan’s contract as a brand ambassador after his comments were criticised by the BJP.