By Lucia Mutikani WASHINGTON (Reuters) - U.S. retail sales recorded their biggest drop in more than nine years in December as receipts fell across the board, suggesting a sharp slowdown in economic activity at the end of 2018. The shockingly weak report from the Commerce Department on Thursday led to growth estimates for the fourth-quarter being cut to below a 2.0 percent annualised rate. 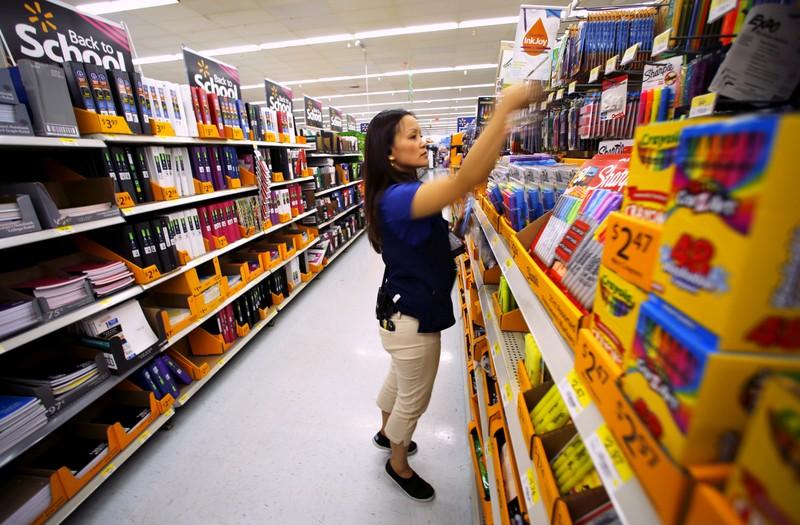 WASHINGTON (Reuters) - U.S. retail sales recorded their biggest drop in more than nine years in December as receipts fell across the board, suggesting a sharp slowdown in economic activity at the end of 2018.

The shockingly weak report from the Commerce Department on Thursday led to growth estimates for the fourth-quarter being cut to below a 2.0 percent annualised rate.

December's collapse in retail sales and other data showing an unexpected increase in the number of Americans filing claims for unemployment benefits last week and a second straight monthly decline in producer prices in January support the Federal Reserve's pledge to be "patient" before raising interest rates further this year.

"Until this morning, Fed official hesitance to hike further was based on risks emanating from global growth and from financial markets, despite a strong domestic outlook," said Andrew Hollenhorst, an economist at Citigroup in New York. "The decline in retail sales calls into question the domestic growth assumption."

Retail sales tumbled 1.2 percent, the largest decline since September 2009 when the economy was emerging from recession. Sales edged up 0.1 percent in November. Economists polled by Reuters had forecast retail sales gaining 0.2 percent in December. Sales in December rose 2.3 percent from a year ago.

The December retail sales report was delayed by a 35-day partial shutdown of the federal government that ended on Jan. 25. No date has been set for the release of the January retail sales report, which was scheduled for publication on Friday.

They argued that the longest government shutdown in history could have impacted on the collection of data. But the Commerce Department said the "processing and data quality were monitored throughout and response rates were at or above normal levels for this release."

Others were reluctant to dismiss the retail sales report, noting that the plunge in sales came as consumer confidence dropped and the U.S. stock market suffered its worst December.

The weak report was corroborated by another report on Thursday from the National Retail Federation showing holiday spending in 2018 grew 2.9 percent to $707.5 billion, with sales in December falling 1.5 percent from November.

"The most plausible economic explanation is that long-dormant wealth effects came back with a vengeance, and consumers slashed their holiday purchases when they saw their 401(k)s going down the drain," said Michael Feroli, an economist at JPMorgan in New York, referring to the retirement savings plans held by millions of Americans.

They surged 1.0 percent in November. December's sharp drop in core retail sales suggested a cooling in the pace of consumer spending in the fourth quarter. Consumer spending, which accounts for more than two-thirds of the U.S. economy, increased at a 3.5 percent rate in the July-September quarter.

The fourth-quarter growth picture also took a hit from another report from the Commerce Department that showed retail inventories excluding automobiles tumbled 1.0 percent in November, the most since December 2008.

The Atlanta Fed slashed its GDP growth estimate for the October-December quarter by 1.2 percentage points to a 1.5 percent rate. The economy grew at a 3.4 percent pace in the third quarter.

U.S. Treasury prices rose on the data, while the dollar slipped against a basket of currencies. Stocks on Wall Street were trading lower, but losses were capped by optimism over U.S.-China trade talks.

There were also declines in receipts at clothing and furniture stores. Americans also cut spending at restaurants and bars. Sales at hobby, musical instrument and book stores plunged 4.9 percent, the biggest drop since September 2008.

The outlook for consumer spending, which has been underpinned by a strong labour market and cheaper gasoline, is not encouraging. A report this week from the New York Fed showed the overall debt shouldered by Americans edged up to a record $13.5 trillion in the fourth quarter of 2018.

In a separate report on Thursday, the Labour Department said initial claims for state unemployment benefits increased 4,000 to a seasonally adjusted 239,000 for the week ended Feb. 9.

"The trend in claims appears to have risen a bit, consistent with at least some slowing in employment growth," said Jim O'Sullivan, chief U.S. economist at High Frequency Economics in White Plains, New York.

A fourth report from the Labour Department showed the producer price index for final demand dipped 0.1 percent last month as the cost of energy products and food fell. The PPI also fell 0.1 percent in December.

In the 12 months through January, the PPI rose 2.0 percent. That was the smallest gain since July 2017 and followed a 2.5 percent rise in December. The PPI report came on the heels of data on Wednesday showing consumer prices were unchanged in January for a third straight month.

"This further corroborates our view that a well-behaved inflationary environment gives the Fed room to remain patient, hiking only once in 2019 and only after a pause in the first half," said Jake McRobie, a U.S. economist at Oxford Economics in New York.