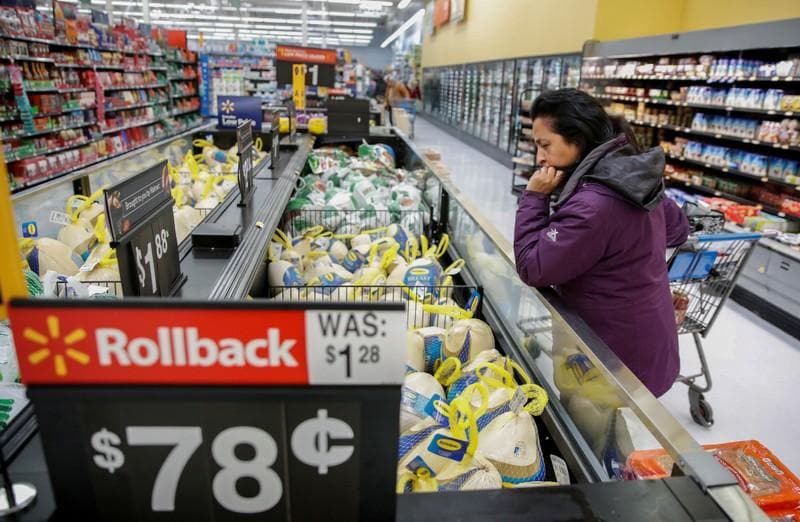 WASHINGTON (Reuters) - U.S. retail sales fell for the first time in seven months in September, suggesting that manufacturing-led weakness could be spreading to the broader economy, keeping the door open for the Federal Reserve to cut interest rates again later this month.

The signs of a deceleration in consumer spending reported by the Commerce Department on Wednesday came on the heels of reports this month showing a moderation in job growth and services sector activity in September.

The economy is being hamstrung by a 15-month trade war between the United States and China, which has soured business sentiment, leading to a decline in capital expenditure and a recession in manufacturing.

"Weaker retail numbers provide further evidence that weakness in the manufacturing sector is spilling over into other areas of the economy," said Jim Baird, chief investment officer at Plante Moran Financial Advisors in Kalamazoo, Michigan.

Retail sales dropped 0.3% last month as households cut back spending on motor vehicles, building materials, hobbies and online purchases. That was the first drop since February.

Data for August was revised up to show retail sales gaining 0.6% instead of 0.4% as previously reported. Economists polled by Reuters had forecast retail sales would climb 0.3% in September. Compared to September last year, retail sales increased 4.1%.

Last month's drop and August's unrevised gain in core retail sales suggested a much more significant slowdown in consumer spending in the third quarter than economists had been anticipating after a surge in the prior quarter.

Consumer spending, which accounts for more than two-thirds of the economy, increased at a 4.6% annualized rate in the second quarter, the most in 1-1/2 years. After the release of the data, economists cut their third-quarter consumer spending growth estimates to around a 2.5% rate from a 3.0% pace.

Signs the economy's growth engine was sputtering could further stoke financial market fears of a sharper slowdown in economic growth. Some economists speculated the cooling in hiring was probably making Americans more cautious about spending.

"The slowdown in job growth is perhaps starting to influence spending habits, but we'll need more data to confirm that thought," said Jennifer Lee, a senior economist at BMO Capital Markets in Toronto.

Major U.S. stock indexes were trading lower while prices of U.S. Treasuries were mostly higher. The dollar was slightly weaker against a basket of currencies.

Though President Donald Trump announced a truce in the trade war with China last Friday, which delayed additional tariffs that were due this month, economists say the longest economic expansion on record remained in danger without all import duties being rolled back.

The International Monetary Fund warned on Tuesday that the U.S.-China trade war would cut 2019 global growth to its slowest pace since the 2008-2009 financial crisis, and expressed caution over Trump's so-called Phase 1 trade deal, saying more details were needed.

Growth is also being restricted by the fading stimulus from last year's $1.5 trillion tax cut package.

With consumer spending slowing, a full trade deal still elusive and the likelihood of a disorderly exit from the European Union by Britain, many economists expect the Fed to cut interest rates at its Oct. 29-30 policy meeting to keep the expansion, now in its 11th year, on track.

The U.S. central bank cut rates in September after reducing borrowing costs in July for the first time since 2008.

"The weakness noted in the retail sales report will be seen by policymakers at the Federal Reserve as a cautionary note and will be yet another reason for the Fed to ease monetary policy again at its October meeting," said David Berson, chief economist at Nationwide in Columbus, Ohio.

The Atlanta Fed is forecasting GDP increased at a 1.7% annualized rate in the third quarter. The economy grew at a 2.0% pace in the April-June quarter, slowing from the first quarter's brisk 3.1% rate.

In addition to the weak retail sales, third-quarter growth estimates could be lowered after another report from the Commerce Department on Thursday showed business inventories were unchanged in August after rising 0.3% in July.

The government will publish its snapshot of third-quarter GDP at the end of the month.

Retail sales in September were weighed down by a 0.9% drop in auto sales. That was the biggest drop in eight months and followed a 1.9% acceleration in August. Receipts at service stations fell 0.7%, likely reflecting cheaper gasoline.

Sales at electronics and appliance stores were unchanged, getting no boost from the launch of Apple's new iPhone model. Sales at building material stores fell 1.0%. Online and mail-order retail sales dropped 0.3%, the most since December 2018. That followed a 1.2% increase in August. Spending at hobby, musical instrument and book stores dipped 0.1%.

But receipts at clothing stores rebounded 1.3% last month after falling 0.7% in August. Sales at furniture stores increased 0.6%. Sales at restaurants and bars gained 0.2%.