By Medha Singh and Devik Jain (Reuters) - U.S. stocks fell on Friday as uncertainty over the government's next coronavirus aid exacerbated economic worries related to the pandemic, countering early euphoria from stunning quarterly results by Apple, Amazon.com and Facebook 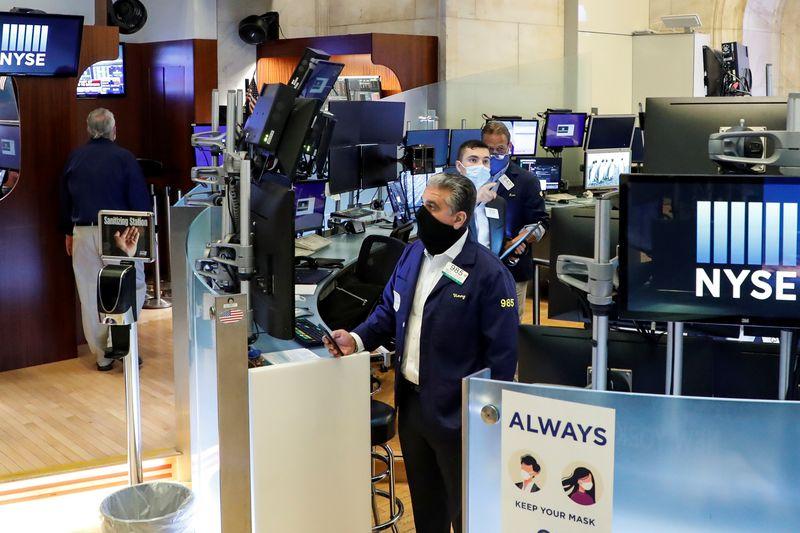 (Reuters) - U.S. stocks fell on Friday as uncertainty over the government's next coronavirus aid exacerbated economic worries related to the pandemic, countering early euphoria from stunning quarterly results by Apple, Amazon.com and Facebook.

Negotiations over coronavirus relief aid continued, but the White House and Democrats were not yet on a path toward reaching a deal, hours before the expiration of a federal unemployment benefit.

"Markets are trading as if there's going to be an emergency stimulus or at least a stopgap measure. Otherwise we would see stocks much, much lower," said Danielle DiMartino Booth, chief strategist of Quill Intelligence in Dallas.

"There's a lot of enthusiasm and investors certainly want stocks to go up, but we keep getting interrupted by the reality of the bad news."

Deaths from COVID-19 appeared to be rising at their fastest rate since early June in the United States, while the epicenter of the pandemic showed signs of shifting to the Midwest.

A surge in the stocks of the tech titans, which make up nearly a fifth of the S&P 500's value, and an estimated $5 trillion in asset purchases unleashed by the five biggest central banks globally have set the S&P 500 on course for its fourth straight monthly gain.

The benchmark index is now about 4% shy of its February all-time high, but faltering macroeconomic data and rising COVID-19 cases in the U.S. are making investors cautious again.

Energy stocks <.SPNY> fell the most among the 11 major S&P sectors after Chevron Corp

The S&P index recorded 25 new 52-week highs and no new low, while the Nasdaq recorded 92 new highs and 20 new lows.

(Reporting by Medha Singh and Devik Jain in Bengaluru; Editing by Saumyadeb Chakrabarty and Shounak Dasgupta)