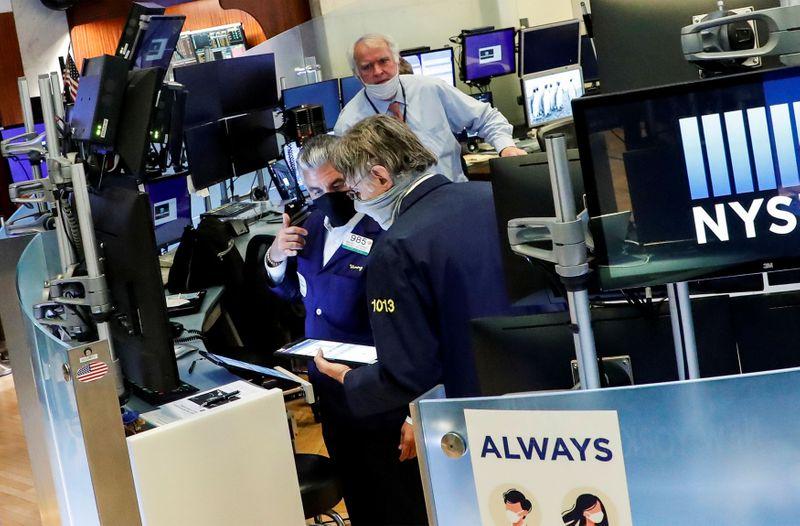 NEW YORK (Reuters) - As a technology-driven rally brings U.S. stock indexes within striking distance of fresh records, concerns that big names are over-extended and that new regulation might be coming have some investors diversifying beyond the rally leaders.

The S&P 500's five biggest companies, Apple Inc, Microsoft Corp, Amazon.com Inc, Alphabet Inc and Facebook Inc now account for 28% of the index's weighting and have been responsible for 25% of its earnings, Goldman Sachs said earlier this month.

On average, these tech and internet-driven stocks have gained 49.23% this year, compared to a 7% gain for the S&P 500 - and are up 9.6% on average since Sept. 21, versus 6.6% for the S&P 500. They are expected to report strong third-quarter earnings in coming weeks, proving their mettle in a year when the coronavirus

Still, some worry that mega-cap tech companies are exposed to factors that may cut their allure in the months ahead. Being long technology is the most crowded trade of all time, according to a recent Bank of America fund manager survey.

"It's all about trying not to have all your eggs in one basket," said Laura Kane, head of Americas thematic investing at UBS Global Wealth Management. "It's about trimming certain exposures and rotating into something else."

UBS analysts have recommended diversifying out of mega-cap tech stocks on signs of an economic recovery and climbing valuations. They urge rebalancing into U.S. semiconductors, which are more sensitive to economic recovery, as well as emerging market value stocks and United Kingdom-based equities.

Societe Generale analysts also recently cited a challenging regulatory environment as one reason to diversify out of U.S. tech shares and into Asian ones and European stocks.

A potential breakthrough in the search for a COVID-19

The median 12-month forward price-to-earnings ratio for the Big 5 tech stocks is 31, while the S&P 500 trades at a 12-month forward PE ratio of 22, according to Refinitiv. Still, they are not as extended as in the dotcom period, with overall profitability, dividends and balance sheet strength in much better shape than 20 years ago.

Companies investors will be watching next week as they report third-quarter results include Netflix Inc on Tuesday, Tesla Inc and Verizon Communication Inc on Wednesday, and Intel Corp on Thursday. Apple, Amazon, Alphabet, Microsoft and Facebook report the following week.

Many investors still see the big tech names, with their strong balance sheets and financial results, as havens as coronavirus

cases continue to climb and the economy struggles with a lack of new fiscal stimulus.

"These companies deliver powerful profits," said Jack Ablin, chief investment officer at Cresset Wealth Advisors. "People have to keep in mind that the five largest tech companies make more in earnings than the entire Russell 2000 combined, so this isn't the internet bubble."

It might be a good idea to trim some tech exposure if the position has gotten too overweighted, but the sector's gains are largely being driven by fundamentals, said Michael Farr, president of Farr, Miller & Washington LLC.

To rotate out of tech because of big gains and some recent volatility would be "a suckers' trade," he added. "Reports of their demise have been greatly exaggerated," he said of the big tech stocks.