By Akanksha Rana and Shreyashi Sanyal (Reuters) - Wall Street slipped on Tuesday hurt by a fall in financial stocks, while revived worries about a U.S. recession overshadowed early optimism of a resolution to the prolonged trade dispute between the world's two largest economies 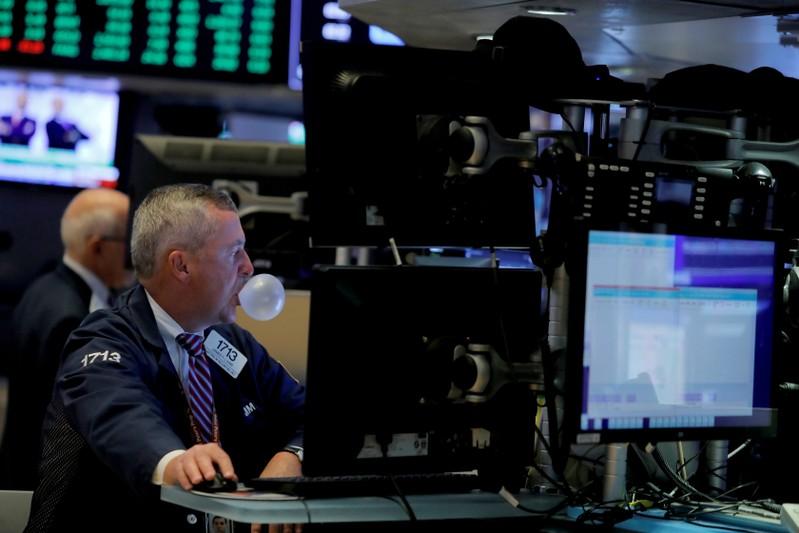 By Akanksha Rana and Shreyashi Sanyal

(Reuters) - Wall Street slipped on Tuesday hurt by a fall in financial stocks, while revived worries about a U.S. recession overshadowed early optimism of a resolution to the prolonged trade dispute between the world's two largest economies.

U.S. stocks were up earlier in the session, building on gains from Monday, after U.S. President Donald Trump sought to ease tensions by predicting another round of talks with Beijing. China's foreign ministry, however, reiterated on Tuesday that it had not received any recent telephone call from the United States on trade.

Investor sentiment soured after the inversion in the U.S. Treasury yield curve deepened further and the benchmark 10-year yields slipped, underscoring safe-haven demand and worries about a softening global economy.

"The fact of the matter is that the last time the yield curve inverted was in 2007 and we went into a recession in December of the same year," said Michael Geraghty, equity strategist at Cornerstone Capital Group in New York.

Interest-rate sensitive financials slid 1%, while defensive sectors such as utilities and real estate were the only ones in positive territory.

Wall Street has been hit in August by worries over the impact of the intensifying U.S.-China trade war on corporate profits, slowing global growth and the lack of clarity on the pace of U.S. interest rate cuts.

Trade tensions between the United States and China intensified after the countries threatened to slap fresh tariffs on each other's goods worth billions of dollars last week.

"There's a lot of concern about what's going on here and as much as the investors try and ignore it and accept the idea that the economy remains strong, the doubts seem to creep into this market," said Rick Meckler, partner, Cherry Lane Investments.

"People are still concerned about the trade war with China and the inconsistencies in a lot of the administration's comments."

With the next Federal Reserve meeting scheduled for September, investors are gauging the strength of the U.S. economy for clues on where rates are headed.

Among stocks, Johnson & Johnson shares rose 1.7% after an Oklahoma judge said J&J must pay $572.1 million for its part in fueling the U.S. opioid epidemic, a sum that was substantially less than what investors had expected.

Philip Morris International Inc shares fell 6.8%, after the tobacco maker said it was in talks with Altria Group Inc to combine in an all-stock merger of equals. Altria's shares were down 4%.

(Reporting by Akanksha Rana and Shreyashi Sanyal in Bengaluru; Editing by Shounak Dasgupta)