By Noel Randewich (Reuters) - Wall Street dropped on Wednesday, led lower by Amazon and Microsoft, as investors lost hope that a fiscal stimulus would be approved before the presidential election in November. 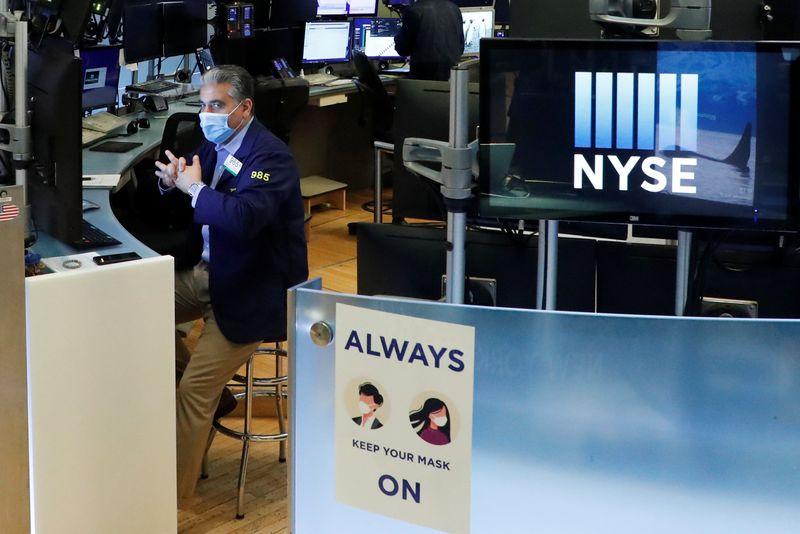 (Reuters) - Wall Street dropped on Wednesday, led lower by Amazon and Microsoft, as investors lost hope that a fiscal stimulus would be approved before the presidential election in November.

Downbeat comments from Treasury Secretary Steven Mnuchin that a deal would not likely be made before the vote added to fragile sentiment following a mixed bag of quarterly earnings reports from major Wall Street lenders.

"At this point getting something done before the election and executing on that would be difficult, just given where we are and the level of detail, but we're going to try to continue to work through these issues," Mnuchin said at a conference sponsored by the Milken Institute.

U.S. stocks had rallied in recent sessions on optimism that the government would provide a fresh stimulus to reduce damage caused by the coronavirus

“Optimism took hold like a rocket last week and now it’s coming back down to earth a little bit,” said Mike Zigmont, head of trading and research at Harvest Volatility Management in New York. "I think a stimulus as a large macro event is already baked into stock prices. It's just a question of when the details emerge and when the stimulus goes into effect."

Third-quarter earnings season is getting underway, with signs of overall improvement in expectations of how badly U.S. companies have been hurt by the pandemic. Analysts expect earnings to fall 19% from a year earlier, according to Refinitiv IBES data, versus a 25% drop forecast on July 1.

Markets have also begun to digest the prospect of a Democratic victory, strategists and fund managers said.

While many investors view Democratic candidate Joe Biden as more likely to raise taxes, they are increasingly pointing to potential benefits of a Biden presidency, such as greater infrastructure spending and less global trade uncertainty.

Declining issues outnumbered advancing ones on the NYSE by a 1.22-to-1 ratio; on Nasdaq, a 1.63-to-1 ratio favored decliners.