By Sinéad Carew NEW YORK (Reuters) - Wall Street's three major indexes ended higher on Monday but well below the session's highs after President Donald Trump said he would delay a planned hike in tariffs on Chinese imports. Postponement of the tariff deadline was seen as the clearest sign yet the two countries were closing in on an agreement to end their prolonged trade spat, which has slowed global growth and disrupted markets. But gains were capped after weeks of advances for the S&P 500, the Dow Jones Industrial Average and the Nasdaq, partly due to trade optimism and dovish signals from the Federal Reserve 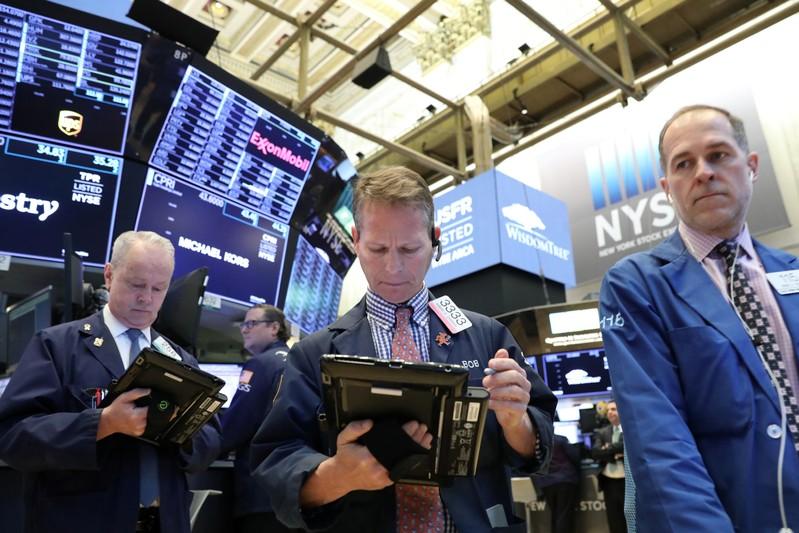 Postponement of the tariff deadline was seen as the clearest sign yet the two countries were closing in on an agreement to end their prolonged trade spat, which has slowed global growth and disrupted markets.

But gains were capped after weeks of advances for the S&P 500, the Dow Jones Industrial Average and the Nasdaq, partly due to trade optimism and dovish signals from the Federal Reserve.

"A lot of the good news related to trade is priced in at this point," said R.J. Grant, head of trading at Keefe, Bruyette & Woods in New York.

"There's only so much we can rally when somebody says we're making progress... The trade stuff is a little bit of a sideshow. If you get back to looking at economic growth, it's clearly slowing."

The S&P 500 index ended 4.9 percent below its late September record closing high after narrowing the gap to 4.3 percent earlier in the session.

Investors were also looking ahead to an appearance by Fed Chairman Jerome Powell before a U.S. Senate committee on Tuesday.

"In the short term trade got taken off the table today so next up on the calendar is Powell speaking to Congress. It's possible investors are starting to clam up a bit because of what they think Powell may say," said Michael Cuggino, portfolio manager at Permanent Portfolio Funds in San Francisco.

Investors were also wary of weakening estimates for current quarter earnings, with Wall Street on Monday expecting a 0.9 percent decline in S&P first-quarter earnings per share compared with expectations for 5.3 percent growth on Jan. 1, according to IBES data from Refinitiv.

“It's hard to get valuations to continue to rise in the face of falling earnings estimates,” said Jeffrey Kleintop, chief global investment strategist at Charles Schwab in Boston.

After advancing as much as 1.4 percent, the financials index lost ground late in the day to close up 0.4 percent.

The industrials sector rose 0.4 percent, getting its biggest boost from General Electric Co, which gained 10.8 percent after announcing a sale of its biopharma business to Danaher Corp for $21.4 billion. Danaher shares rose 8.2 percent.

A flurry of M&A activity also helped the risk-on sentiment.

The biggest laggards were the S&P's defensive sectors - consumer staples, utilities and real estate. The consumer discretionary sector also ended down 0.3 percent, with the biggest drag from Home Depot, down 1.3 percent, on concerns about a soft housing market ahead of its quarterly results.

Advancing issues outnumbered declining ones on the NYSE by a 1.14-to-1 ratio; on Nasdaq, a 1.05-to-1 ratio favoured advancers.

Volume on U.S. exchanges was 7.36 billion shares, compared with the 7.32 billion average for the last 20 trading days.