By Stephen Culp NEW YORK (Reuters) - Wall Street gained on Monday, setting the S&P 500 and the Nasdaq on track for record closing highs as optimism over potential medical advances in the war against the coronavirus pandemic helped keep investors in a buying mood. The benchmark S&P 500 reclaimed its February closing high last week, confirming a bull market and the fastest recovery from a bear market trough on record 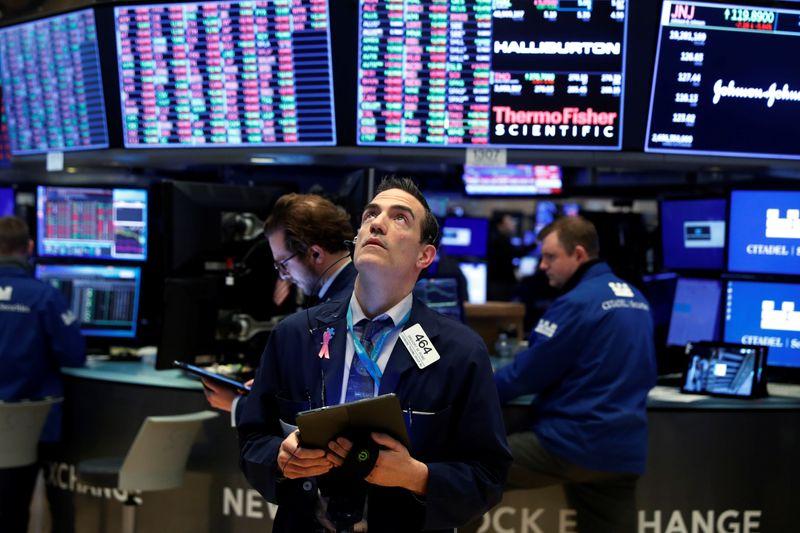 NEW YORK (Reuters) - Wall Street gained on Monday, setting the S&P 500 and the Nasdaq on track for record closing highs as optimism over potential medical advances in the war against the coronavirus pandemic helped keep investors in a buying mood.

The benchmark S&P 500 reclaimed its February closing high last week, confirming a bull market and the fastest recovery from a bear market trough on record.

The blue-chip Dow, while leading Monday's gains, remains nearly 5% off its all time high, and down just over 1% year-to-date. The Nasdaq and the S&P have gained over 26% and nearly 6%, respectively, since the final closing bell of 2019.

"There was no news over the weekend following last week's (bull market) confirmation to cause a shift in thinking," said Oliver Pursche, president of Bronson Meadows Capital Management in Fairfield, Connecticut.

Markets worldwide were given a boost by new developments in the global race to battle the coronavirus, including an announcement from the Food and Drug Administration that it had given emergency authorization for the use of plasma from recovered patients as a treatment option.

However, the World Health Organization expressed skepticism about the treatment due to "low quality" data.

"Trump's team has been very vocal about getting a vaccine before the election," Pursche said.

The four-day Republican national convention gets under way on Monday, with the party nominating President Donald Trump for a second term and making the case for his re-election.

Market participants will pay close attention to U.S. Federal Reserve Chairman Jerome Powell's remarks on monetary policy at this week's Kansas City Fed Jackson Hole symposium, which is being held this year in a virtual format.

Of the 11 major sectors in the S&P 500, all but healthcare <.SPXHC> and real estate <.SPLRCR> were in positive territory.

Ahead of its 4-to-1 share split on Friday, Apple Inc

Advancing issues outnumbered declining ones on the NYSE by a 2.42-to-1 ratio; on Nasdaq, a 1.16-to-1 ratio favored advancers.