By Sruthi Shankar and Amy Caren Daniel (Reuters) - U.S. stocks were little changed on Monday, as investors were wary of making big bets ahead of a barrage of reports from major companies this week. About a third of the S&P 500 companies, including Boeing Co, Amazon.com Inc and Facebook Inc, are scheduled to report their results, which could determine whether investors should be concerned about the start of an earnings recession or whether back-to-back quarters of negative growth can be avoided. 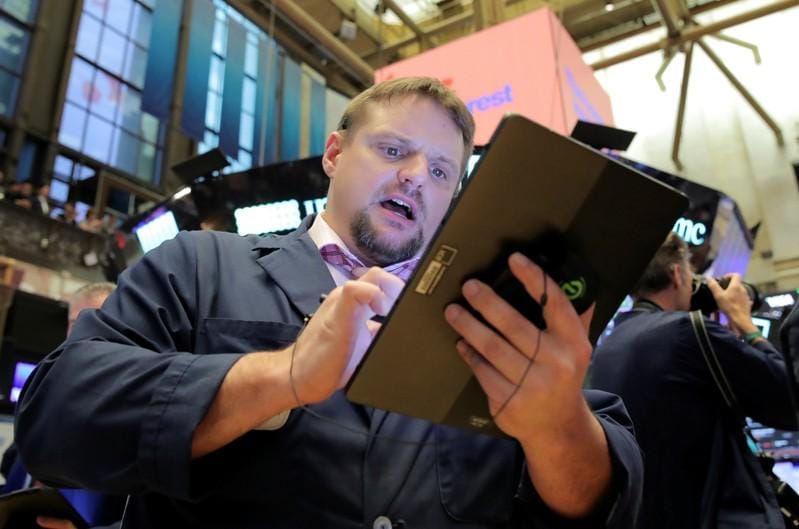 (Reuters) - U.S. stocks were little changed on Monday, as investors were wary of making big bets ahead of a barrage of reports from major companies this week.

About a third of the S&P 500 companies, including Boeing Co, Amazon.com Inc and Facebook Inc, are scheduled to report their results, which could determine whether investors should be concerned about the start of an earnings recession or whether back-to-back quarters of negative growth can be avoided. [.N/O]

Despite upbeat earnings so far, the S&P 500 has been trading in a narrow range and was 1.2% below a record high it hit in late September.

"Uncertainty is part of the equation here. We have major earnings coming up and some traders are waiting to see how that goes before making any big moves," said Everett Millman, precious metals specialist at Gainesville Coins in Lutz, Florida.

However, more than three-quarters of 82 S&P 500 companies that have reported so far have surpassed beaten-down expectations.

"We're seeing a trend where markets are looking for direction. If big companies come out and caution about the pace going forward that could be a concern for markets," said Scott Brown, chief economist at Raymond James in St. Petersburg, Florida.

The S&P energy index jumped 2.2%, the most among the major S&P sectors, as oil prices surged on the United States' move to further clampdown on Iranian oil exports, tightening global supplies. [O/R]

Halliburton Co, which swung between gains and losses was last up 0.3%, said a pricing downturn that has plagued the sector was bottoming out and reported better-than-expected revenue in North America in the first quarter.

That was followed by healthcare stocks, which dropped 0.3%, extending its rout from recent weeks.

Intuitive Surgical Inc fell 7.4% and was the biggest drag on the S&P 500 after the surgical robotics maker's quarterly profit missed analysts' estimates.