By Stephen Culp NEW YORK (Reuters) - Wall Street was mixed on Friday, with the S&P 500 and the Dow hovering just below all-time highs as cautious optimism regarding easing U.S.-China trade tensions was held in check by a drop in Apple stock. Tariff-vulnerable industrials helped keep the blue chip Dow in positive territory, which was on track for its eighth straight daily advance, its longest winning streak since May 2018. 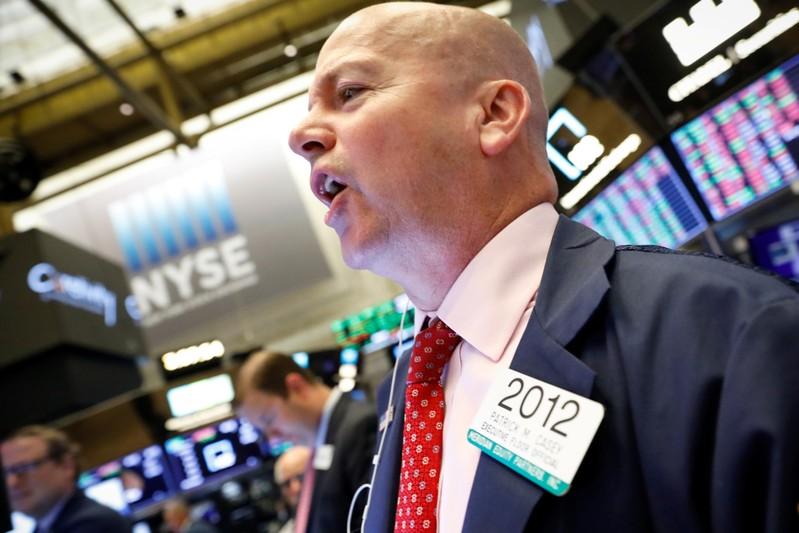 NEW YORK (Reuters) - Wall Street was mixed on Friday, with the S&P 500 and the Dow hovering just below all-time highs as cautious optimism regarding easing U.S.-China trade tensions was held in check by a drop in Apple stock.

Tariff-vulnerable industrials helped keep the blue chip Dow in positive territory, which was on track for its eighth straight daily advance, its longest winning streak since May 2018.

All three major U.S. stock indexes looked set to post their third straight weekly gains, capping a week that saw signs of a potential thaw in the trade war between the world's two largest economies that has gripped markets for months.

Beijing announced it would exempt some U.S. agricultural products from additional tariffs after President Donald Trump suggested he could be open to an interim deal, the latest in a series of conciliatory gestures by both sides of the trade war ahead of next month's negotiations in Washington.

"We've had these small concessions back and forth, which at minimum gives investors some confidence that things are moving in the right direction," said Joseph Sroka, chief investment officer at NovaPoint in Atlanta. "I don't think the Chinese are going to roll over on trade but they recognise there is a mutual benefit to keep the U.S. from escalating the trade war."

On the economic front, U.S. retail sales increased in August at twice the rate analysts expected, according the Commerce Department, suggesting that strong consumer spending will continue to support the longest-ever U.S. economic expansion.

"Investors will reevaluate their appetite for equities at the next big catalyst event, which will be the Fed meeting," Sroka added.

Indeed, the U.S. Federal Reserve is widely expected to cut interest rates by 25 basis points at the conclusion of its monetary policy meeting next week.

Of the 11 major sectors in the S&P 500, seven were in the red, with real estate <.SPLRCR> suffering the largest percentage loss.

Materials <.SPLRCM> and financial <.SPSY> stocks were the biggest gainers, up 1.3% and 1.0%, respectively.

Declining issues outnumbered advancing ones on the NYSE by a 1.02-to-1 ratio; on Nasdaq, a 1.38-to-1 ratio favoured advancers.