By Shreyashi Sanyal and Arjun Panchadar (Reuters) - Wall Street edged lower on Wednesday, as concerns over an escalation in the U.S.-China trade war and weak economic indicators persisted, while a raft of upbeat results underlined a solid start to the third-quarter earnings season. 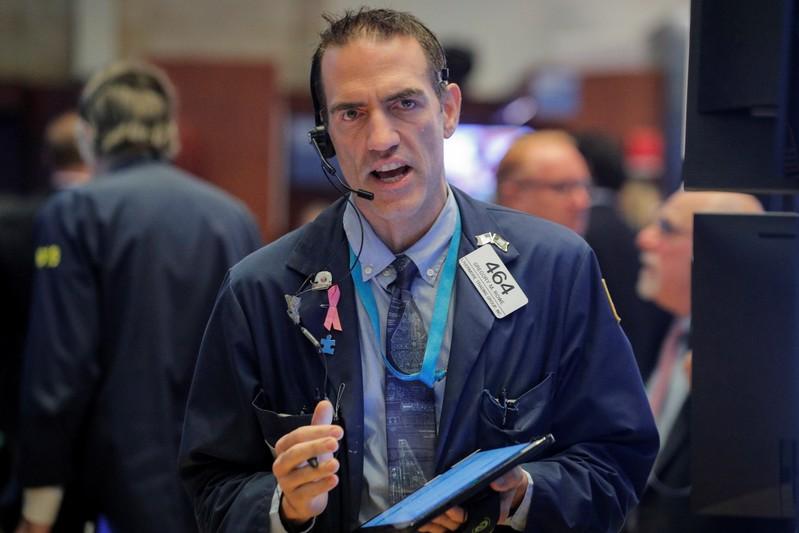 (Reuters) - Wall Street edged lower on Wednesday, as concerns over an escalation in the U.S.-China trade war and weak economic indicators persisted, while a raft of upbeat results underlined a solid start to the third-quarter earnings season.

U.S. stocks came under pressure after the U.S. House of Representatives on Tuesday passed legislation related to pro-democracy protests in Hong Kong, while data on Wednesday showed a fall in U.S. retail sales for the first time in seven months in September.

However, investors cheered positive results from Bank of America, which rose 2% after beating analysts' estimates for third-quarter profit.

The reports followed strong earnings on Tuesday from JPMorgan Chase & Co and Citigroup Inc, showing consumer confidence remained strong despite recession fears that have led businesses to pull back on spending and borrowing.

"Earnings by and large has been pretty good so far but the China headlines are definitely humming in the background," said Kim Forrest, chief investment officer at Bokeh Capital Partners in Pittsburgh.

"A lot of investor hopes are pinned on some of these tensions abating, because that is a linchpin on why you should own stocks," she added.

Analysts have forecast the worst quarterly earnings season in nearly three years for S&P 500 companies, as domestic economic growth shows signs of slowing on the fallout from the tariff war with China.

Of the 43 S&P 500 companies that have reported earnings so far, 86% have topped Wall Street expectations, according to IBES data from Refinitiv.

Among other stocks, United Airlines was up 2.5% after the carrier raised its 2019 profit target.

Drug distributors McKesson, AmerisourceBergen and Cardinal Health jumped between 3% and 5% after a report that they were in talks with state and local governments to settle thousands of opioid lawsuits for $18 billion.

Investors now await quarterly results from Netflix Inc and International Business Machines, due to report after markets close on Wednesday.

The S&P index recorded 12 new 52-week highs and no new low, while the Nasdaq recorded 30 new highs and 53 new lows.