By Medha Singh (Reuters) - Wall Street fell in volatile trading on Friday, after a few failed attempts at a rally, led by a drop in technology and other high-growth sectors, while defensive stocks rose amid concerns of slowing growth and a looming government shutdown. 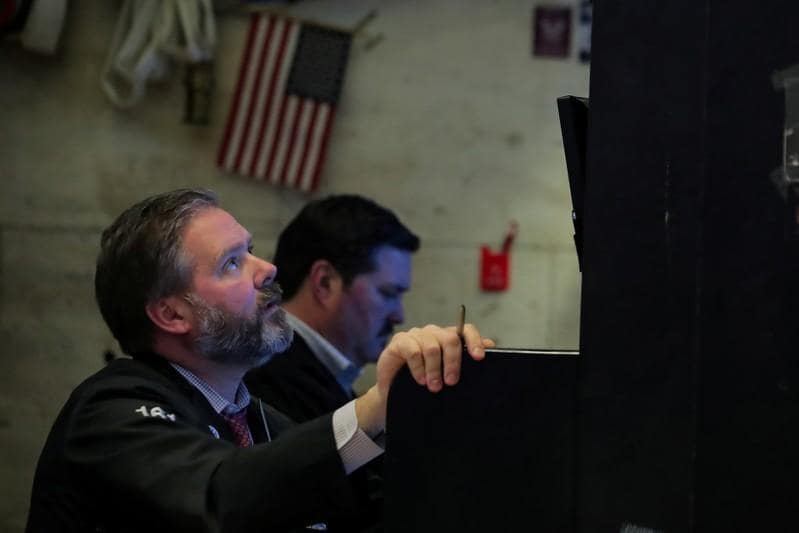 (Reuters) - Wall Street fell in volatile trading on Friday, after a few failed attempts at a rally, led by a drop in technology and other high-growth sectors, while defensive stocks rose amid concerns of slowing growth and a looming government shutdown.

The three major indexes swung between losses and gains of more than 1 percent as fragile investor nerves were tested by news of turmoil in Washington and soothing comments from an influential Federal Reserve official.

The S&P 500, already on pace for its worst December since the Great Depression, hit its lowest since August 2017. The Dow fell to its lowest since October 2017, while the Nasdaq sank to a 15-month low, toying with bear market territory for the second day in a row.

The defensive consumer staples <.SPLRCS>, utilities <.SPLRCU> and real estate <.SPLRCR> sectors logged gains of 0.1 percent to 0.77 percent, while all the other eight S&P sectors declined.

"Investors are looking for cover. Within equities, investors are certainly gravitating towards the traditionally defensive segments of the market," said Mike Loewengart, vice-president of investment strategy at E*TRADE Financial in New York.

President Donald Trump said there was a very good chance a government funding bill, which included funding for a wall along Mexico border, would not pass the Senate. Those worries were compounded by the sudden resignation of U.S. Defense Secretary Jim Mattis.

"I think it's a confluence of all the known issues that the investors have been digesting for the last few weeks. We have the prospect of a government shutdown today. We have more shake ups within the Trump administration," Loewengart said.

The markets got a lift earlier after New York Fed President John Williams said on CNBC the central bank is open to reassessing its views and listening to market signals that the economy could fall short of expectations.

Williams' comments come after the Fed said on Wednesday it would largely stick to its plan to keep raising interest rates, spooking investors already grappling with mounting evidence of slowing growth and triggering the slide on Wall Street.

Adding to the mix was "quadruple-witching," when options on stocks and indexes as well as futures on indexes and stocks expire, tending to raise volumes.

Helping stanch the bleeding on Friday was Nike Inc

The three main Wall Street indexes are already in correction territory, having fallen more than 10 percent from their record closing highs. They are closing in on bear market territory, which is marked when an index closes more than 20 percent below its closing high.