By Amy Caren Daniel (Reuters) - The S&P 500 and Dow Jones Industrial Average traded slightly lower on Monday, as early gains tracking a rally in China market faded with oil and financial stocks pushing the indexes lower. But a near 2 percent gain for Amazon and Apple at the start of a big week for technology earnings, helped the Nasdaq gain and lifted the S&P technology sector more than 1 percent. U.S. 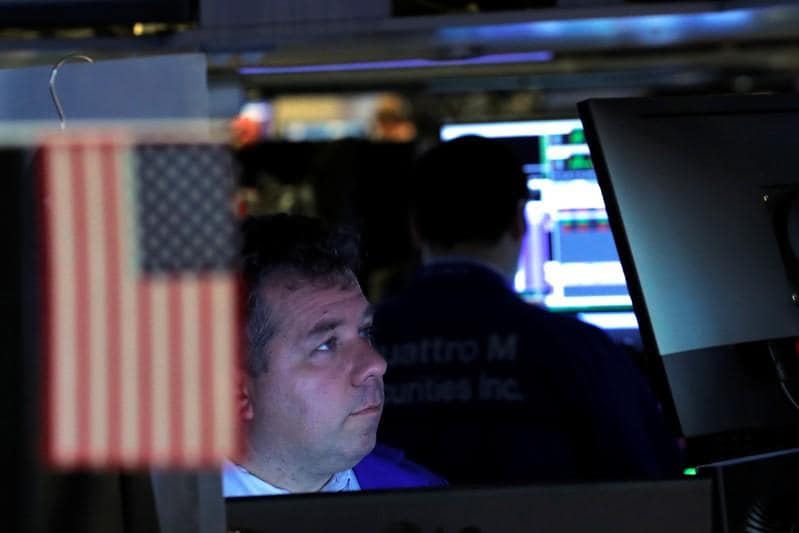 But a near 2 percent gain for Amazon and Apple at the start of a big week for technology earnings, helped the Nasdaq gain and lifted the S&P technology sector more than 1 percent.

The markets, however, quickly turned lower, with analysts saying that neither China hope nor Italy relief was enough for Wall Street gains to sustain.

"Futures rallied with China, which obviously has been down close to 30 percent this year, and there was news of government policy intervention that really wasn't for U.S. markets to be up," said Mike O'Rourke, chief market strategist in JonesTrading in Greenwich, Connecticut.

Gains in the high-growth stocks capped losses in the S&P and the Dow. Amazon rose 1.7 percent and Google-parent Alphabet gained 0.75 percent. Both of them are due to report results later this week. Both Facebook and Apple gained about 1 percent and are expected to report quarterly results next week.

"Investors are looking for opportunities to buy right now. They are taking advantage of the recent sell-off to buy high-growth stocks," said Jeff Carbone, managing partner for Cornerstone Wealth, in Charlotte, North Carolina.

The tech sector has lost about 6 percent of its value so far this month, bringing stock valuations of high-growth companies down from historically expensive levels.

Intel gained 1.2 percent after Nomura upgraded the stock to "buy", according to a trader.

The energy sector fell 1.3 percent after crude oil prices slipped below $80 a barrel as Saudi Arabia pledged to raise its crude production to a record.

Also weighing was a 2.9 percent drop in oilfield services provider Halliburton, which forecast a drop in current-quarter profit.

Financials fell 1.4 percent, the most among the 11 major S&P sectors as the U.S. Treasury yield curve flattened to its lowest level in more than two weeks.

Leading the losses in health stocks was Bristol-Myers, down 5.7 percent after the U.S. health regulator said it would take more time to decide on the company's cancer therapy.

A number of disappointing earnings reports also did not help the mood ahead of what is expected to be the heaviest earnings week this season.

While a strong economy and deep corporate tax cuts are expected to have driven profits of S&P 500 companies up 22 percent in the third quarter, according to Refinitiv data, investors are nervous over the outlook for future growth due to concerns over trade, rising costs and other factors.

Hasbro dropped 4.6 percent after its quarterly results missed estimates, as the demise of major retail partner Toys 'R' Us hurt sales in the United States and Europe. Mattel fell 1.2 percent.