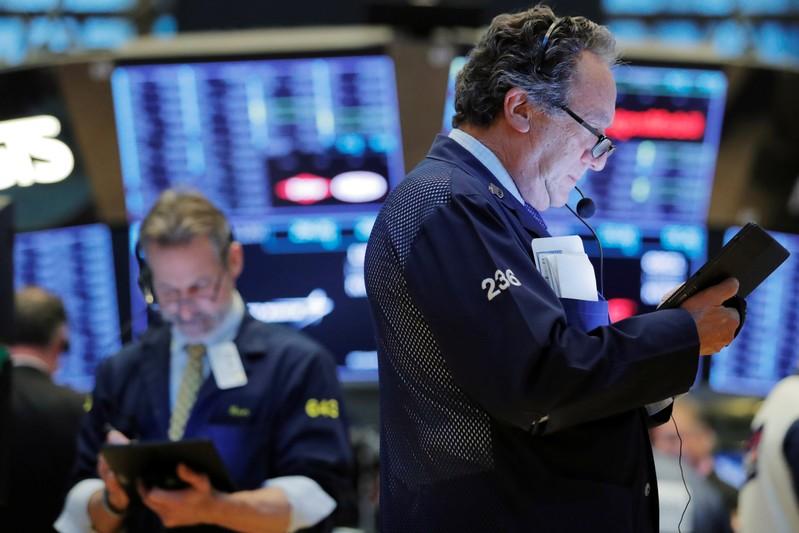 (Reuters) - Wall Street's main indexes were lower on Wednesday, as a prolonged inversion in the U.S. treasury yield curve fanned worries of an economic slowdown.

The yield curve inverted for the first time since 2007 on Friday and if the inversion continues to persist it could indicate that a recession is likely in one to two years. [US/]

"The yield curve is clearly worth paying close attention to given historical precedence. While recession risk still seems off the table, deceleration is readily apparent," said Bryan Reilly, a managing director at CIBC U.S. Private Wealth Management in Boston.

Investors have been fretting about slowing economic growth since last week after the Federal Reserve did a stunning about-turn on rate hikes and dour factory data from the United States, Europe and Japan.

The European Central Bank became the latest central bank to delay a planned increase in rates amid rising threats to growth.

"Continuing economic challenges and remarks from the ECB have got equity investors on the cautionary side," Reilly said.

All the major S&P sectors were trading lower, with healthcare, energy, communication services and technology stocks posting losses of more than 1 percent.

However, not all data was bleak. A Commerce Department report showed that U.S. trade deficit dropped more than expected in January, likely as Chinese purchases of soybeans spurred a rebound in exports after three straight monthly declines.

Lennar Corp rose 4.4 percent as the No.2 U.S. homebuilder said it expected housing market to improve, driving a 1.3 percent gain in the housing index.

Also helping was a survey that showed mortgage applications in the week ended March 22 rose nearly 9 pct amid lower interest rates, according to the Mortgage Bankers Association.