By April Joyner NEW YORK (Reuters) - U.S. stocks declined sharply on Wednesday after the Federal Reserve's forecast of fewer interest-rate increases in 2019 fell short of investors' hopes of a more dovish monetary policy. The Dow Industrials closed at their lowest level since November 2017 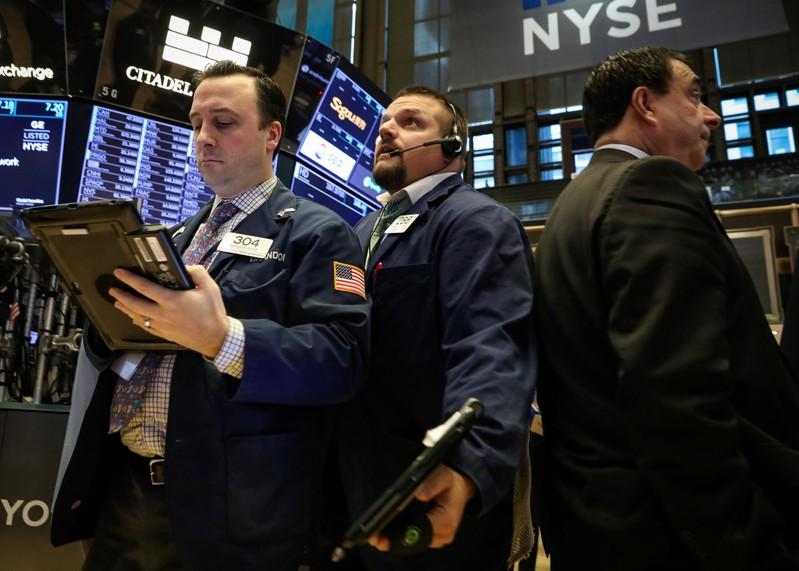 The Dow Industrials <.DJI> closed at their lowest level since November 2017. The Dow Transports <.DJT> plunged 3.2 percent to confirm bear market territory, down nearly 21 percent from their record high on Sept. 14.

Investors said Powell's remarks that he did not see the central bank changing its policy of keeping its balance sheet run-off on "autopilot" raised concerns of tightening financial conditions placing further strain on financial markets.

"Powell is steadfast in his commentary today that he doesn't see any tightening that stems from the unwinding of the balance sheet," said Quincy Krosby, chief market strategist at Prudential Financial in Newark, New Jersey. "The market message is we are seeing tighter financial conditions and a weaker path for growth."

And while the Fed now expects two rate hikes in 2019, down from three in its previous economic forecasts in September, investors said the slower pace was not enough to calm concerns about the possible negative effects of rising rates as economic growth slackens.

"The market is just kind of recognising the Fed is not throwing them a lifeline anytime soon," said Michael O'Rourke, chief market strategist at JonesTrading in Greenwich, Connecticut.

All of the S&P 500's major sectors fell. Utilities <.SPLRCU>, real estate <.SPLRCR> and consumer staples <.SPLRCS> posted the smallest percentage declines. The defensive sectors have risen as U.S. stocks have become more volatile in recent months. With Wednesday's losses, only utilities and healthcare <.SPXHC> were in positive territory for the year.

The members of the FAANG group of momentum stocks, which helped lift the Nasdaq on Tuesday, all registered losses. Shares of Amazon.com Inc

Facebook shares dropped 7.3 percent, their biggest percentage decline since July. The New York Times reported that the social media giant allowed some companies far greater access to data than disclosed. The company said the access was provided only after user permission.

Declining issues outnumbered advancing ones on the NYSE by a 2.58-to-1 ratio; on Nasdaq, a 2.93-to-1 ratio favoured decliners.

Volume on U.S. exchanges was 10.81 billion shares, compared to the 8.22 billion average over the last 20 trading days.