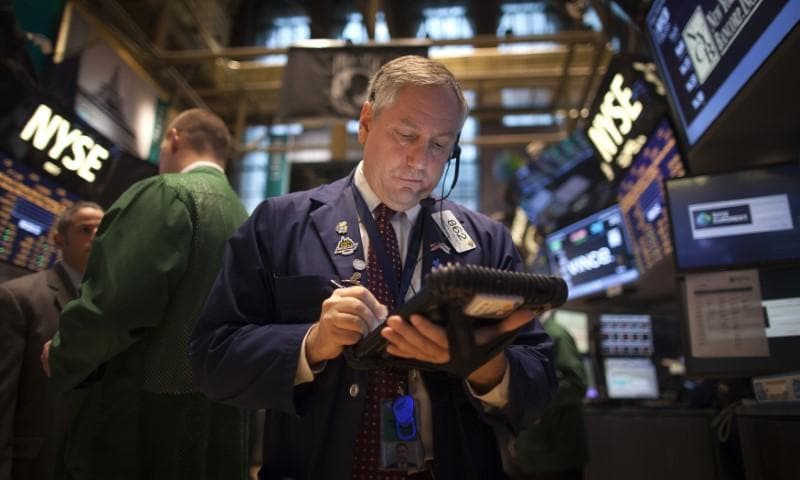 Comments by U.S. President Donald Trump that China "has become very spoiled on trade," cast doubt on his efforts to avoid a tariff war between the world's two largest economies, increasing investor jitters at the outset of a second round of high-level negotiations.

"This is becoming very real, American businesses are suffering," Bell said. "The trouble with tariffs, is they're always bad, they always increase the costs of almost everything for consumers and they destroy more jobs than they create."

U.S. small-cap stocks fared better than their larger rivals. The Russell 2000 index <.RUT> closed at a record high for a second day in a row, while larger firms with more international exposure were pressured by rising oil prices and a strengthening dollar.

"Small companies are not as exposed to international trade dynamics," said Bell.

Economic reports showed U.S. unemployment rolls dropping to their lowest level since 1973 and mid-Atlantic manufacturers asking higher prices for their products. The tightening labor market conditions and firming inflation bolster the likelihood of a Federal Reserve rate hike next month.

So-called defensive stocks were among the worst performer among the 11 major sectors of the S&P 500. Rate-sensitive telecom <.SPLRCL>, real estate <.SPLRCR> and utility <.SPLRCU> shares were down in the face of increasing U.S. government bond yields.

Advancing issues outnumbered declining ones on the NYSE by a 1.15-to-1 ratio; on Nasdaq, a 1.52-to-1 ratio favored advancers.

Volume so far on U.S. exchanges was 6.37 billion shares, compared to the 6.65 billion average for the full session over the last 20 trading days.