By April Joyner NEW YORK (Reuters) - Wall Street's major stock indexes edged higher on Friday after falling in the previous session, as hopeful comments from U.S. President Donald Trump regarding trade relations with China assuaged concerns among some investors. Trump said late on Thursday that he saw a resolution to the trade war with China 'happening fast.' He added that Chinese telecom equipment company Huawei Technologies Co Ltd, which the White House has blacklisted, could also be included in a trade deal 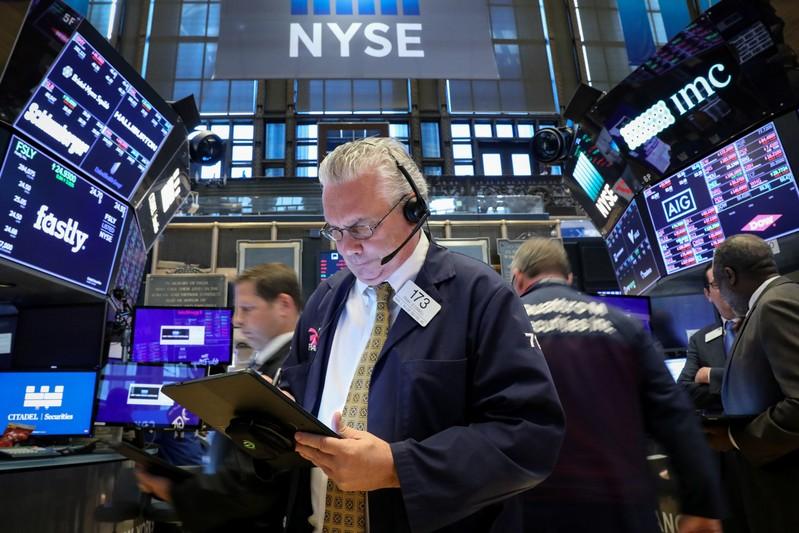 Trump said late on Thursday that he saw a resolution to the trade war with China "happening fast." He added that Chinese telecom equipment company Huawei Technologies Co Ltd, which the White House has blacklisted, could also be included in a trade deal.

No high-level talks between the United States and China have been scheduled since the last round of negotiations in Washington two weeks ago.

Yet Trump's comments were enough to give a slight lift to U.S. stocks in muted activity ahead of a long weekend. Friday marked the lowest volume of the year for a full trading session. U.S. markets will be closed on Monday for the Memorial Day holiday.

"There are some small positive stories here and there," said John Carey, managing director and portfolio manager at Amundi Pioneer Asset Management in Boston. "With light trading volume, it doesn't take too much to get things moving."

Stocks rose broadly, with nine of the S&P 500's major sectors moving higher, though declines in shares of Apple Inc and Alphabet Inc capped gains on the major indexes.

Even so, the S&P 500 ended the week more than 1% lower to notch the third straight week of losses for the benchmark index, which has been weighed down by fears that the U.S.-China trade war would result in a global economic slowdown.

Adding to concerns about a slowing broader economy, data showed that new orders for U.S.-made capital goods fell more than expected in April.

Despite Friday's gains, said Robert Phipps, a director at Per Stirling Capital Management, "when you have the world's two biggest economies intending to inflect economic pain on each other, it's not a good environment for equity investors."

For the week, the Dow declined 0.68%, the S&P 500 fell 1.16% and the Nasdaq dropped 2.29%. The Dow slid for the fifth straight week, its longest such losing streak in eight years, while the S&P 500 and Nasdaq each registered their first three-week declines of the year.

The small-cap Russell 2000 gained 0.9%, outpacing the major indexes, though it fell 1.4% for the week. In a contrast from their performance last spring, small-cap stocks have dropped largely in line with their large-cap counterparts as U.S.-China trade tensions have ratcheted up.

Autodesk Inc shares fell 4.9% after the software maker reported quarterly revenue and earnings that were below expectations.

Advancing issues outnumbered declining ones on the NYSE by a 1.98-to-1 ratio; on Nasdaq, a 1.83-to-1 ratio favored advancers.

Volume on U.S. exchanges was 5.48 billion shares, compared to the 6.95 billion average for the full session over the last 20 trading days.