By Stephen Culp NEW YORK (Reuters) - U.S. stocks joined their global counterparts in the black, and were on track for weekly gains on Friday as ongoing fiscal aid talks and growing expectations for Democratic election victories revived hopes over economic stimulus. Gold surged and the dollar dropped as investors bet on the increased probability of forthcoming coronavirus relief 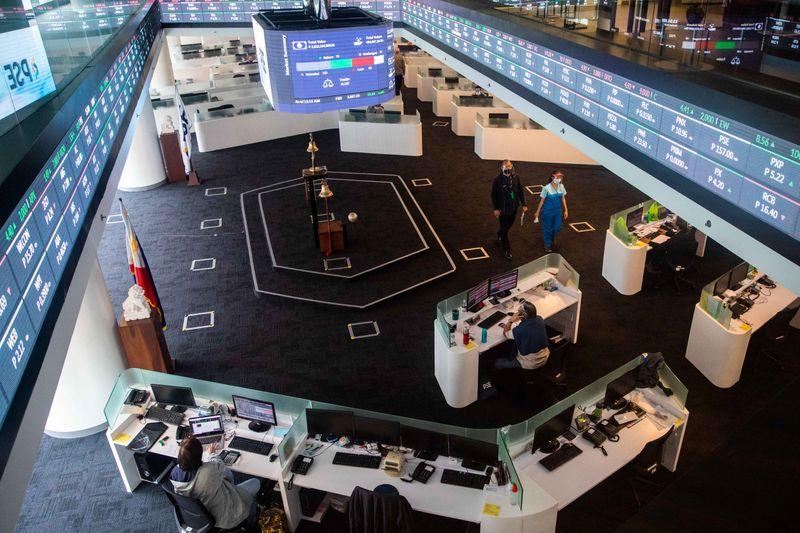 NEW YORK (Reuters) - U.S. stocks joined their global counterparts in the black, and were on track for weekly gains on Friday as ongoing fiscal aid talks and growing expectations for Democratic election victories revived hopes over economic stimulus.

Wrangling in Washington over pandemic aid has dominated markets this week, which began with President Donald Trump halting negotiations on a comprehensive aid package.

U.S. House Speaker Nancy Pelosi and Treasury Secretary Steven Mnuchin continue to hammer out a deal, even as Senate Majority Leader Mitch McConnell expressed doubt that consensus could be reached before the election.

But a report from the Wall Street Journal said Mnuchin was drafting a proposal worth $1.8 trillion, closer to the $2.2 trillion package Pelosi has floated.

"It's 'will they or won't they?', but the market is maybe becoming less concerned about the timing of a stimulus package," said Chuck Carlson, chief executive officer at Horizon Investment Services in Hammond, Indiana.

"I think there's going to be a stimulus package within the next two months and probably sooner," Carlson added.

, but aides said Trump was unlikely to hold any in-person events until Monday at the earliest.

"The market is saying there's a good chance (fiscal relief) might not happen until after the election," said Carlson, adding "if there's a 'blue wave' the package will be more significant."

Next week, investors' attention will shift to reporting season, and analysts now see third quarter S&P 500 earnings, in aggregate, falling by 21% year-on-year, according to Refinitiv.

Crude prices fell after an offshore oil worker strike in Norway ended eased supply pressures, but production was reduced in the United States due to Hurricane Delta.

The dollar dropped against a basket of world currencies on fiscal relief optimism and the growing likelihood of a Biden victory.

The Japanese yen strengthened 0.39% versus the greenback at 105.63 per dollar, while Sterling

Gold prices jumped as the increased likelihood of stimulus pushed investors to bullion as a hedge against possible inflation.