By Koh Gui Qing and Huw Jones NEW YORK/LONDON (Reuters) - Global shares dropped on Thursday as investors shied from risk and sought safe-havens such as the U.S. dollar on fears that a resurgence in coronavirus cases and a lack of more U.S. fiscal stimulus would hobble the world economy 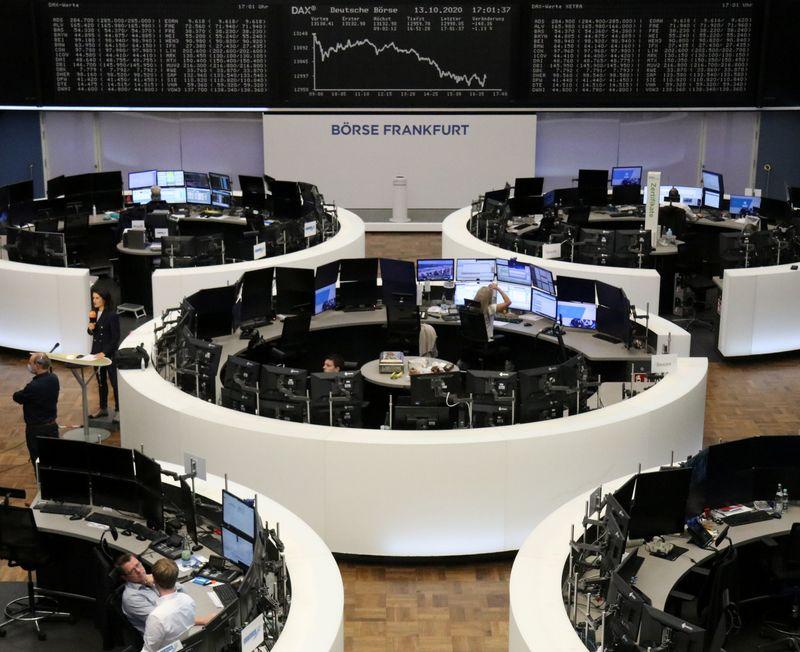 NEW YORK/LONDON (Reuters) - Global shares dropped on Thursday as investors shied from risk and sought safe-havens such as the U.S. dollar on fears that a resurgence in coronavirus

cases and a lack of more U.S. fiscal stimulus would hobble the world economy.

An unexpected rise in U.S. weekly jobless claims figures added to worries that the U.S. economy may sputter if government does not act soon to shore up growth, especially in the face of a spike in COVID-19

The run of negative news dragged on European shares, which were on course for their worst day in 3-1/2 weeks.

An offer by U.S. President Donald Trump on Thursday to raise the size of a U.S. fiscal stimulus package to win the support of Republicans and Democrats helped to narrow losses in equity markets, though many investors still believe a deal is not possible before the Nov. 3 election.

"Now, the U.S. economy goes into the winter months without much-needed fiscal stimulus," they wrote in a note.

Underlining concerns about the health of the world economy, data showed on Thursday China's factory gate prices fell at a faster-than-expected rate in September while consumer inflation slowed to its weakest pace in 19 months.

The shift toward safety helped the U.S. dollar, a traditional safe-haven asset. The greenback <=USD> jumped 0.4% against a basket of six major currencies to 93.809.

A firmer dollar dragged on sterling

Gold reversed earlier losses to trade in the black, helped in part by Trump's comments that he was keen on more U.S. fiscal stimulus before the November election. Spot gold

Oil prices, however, were weighed by concerns about the coronavirus

and its impact on the world economy, though losses narrowed compared to earlier in the day.

(Reporting by Koh Gui Qing; Editing by Will Dunham and Nick Zieminski)