By Lisa Baertlein and Ankit Ajmera (Reuters) - United Parcel Service Inc said it saw signs of softening in the U.S. economy and issued a disappointing second-quarter profit forecast, sending shares down 7 percent even as it promised a strong end to the year. 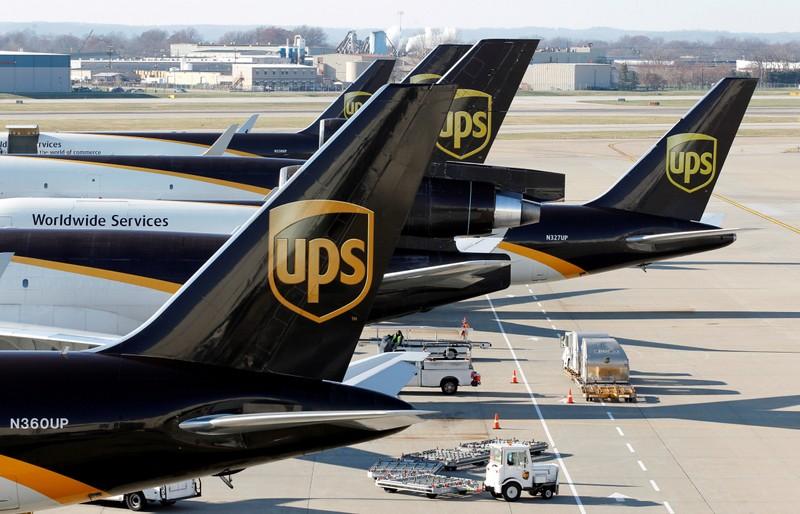 (Reuters) - United Parcel Service Inc said it saw signs of softening in the U.S. economy and issued a disappointing second-quarter profit forecast, sending shares down 7 percent even as it promised a strong end to the year.

First-quarter results at UPS were slammed by severe winter weather in the U.S. Northeast and Midwest, but executives said cost cuts and a multibillion-dollar network revamp to improve efficiency would help the company meet its 2019 profit target with a strong second half.

Still, analysts said it would be difficult for the company to hit its reiterated 2019 earnings forecast of $7.45 to $7.75 per share, after first-quarter earnings fell short of Wall Street's target and UPS forecast flat profit for the second quarter.

"It implies a heroic ramp" up from an expected 5 percent year-over-year decline in earnings per share in the first half to a rise of 10 to 18 percent in the second half, Bernstein analyst David Vernon said in a note, using his own estimates.

"There is pressure on management to execute at a high level during the peak" year-end holiday shipping season, Cowen analyst Helane Becker said. Logistics companies like UPS are seen a bellwethers for the global economy. Rival FedEx was first to warn about a global trade cool-down affecting its results, due in part to the U.S.-China trade battle and to Britain's exit from the European Union. But neither company had signaled a deceleration in growth in the United States until Thursday, when UPS Chief Executive said the domestic economy is growing "at a slower pace."

Operating profit in UPS' U.S. domestic business, its biggest, dropped to $666 million in the quarter ended March 31, from $756 million a year earlier, largely due to an $80 million hit from weather-related disruptions.

Net income fell more than 17 percent to $1.1 billion, or $1.28 per share, from the year-earlier quarter, including a 7 cent per share hit from severe U.S. weather.

Excluding an 11 cent per share charge related to modernizing its network, UPS earned $1.39 per share, missing analysts' average estimate of $1.41, according to IBES data from Refinitiv.

Chief Financial Officer Richard Peretz told Reuters 2019 was a "pivot point" for the company, which is building on its three-year plan to automate package-sorting hubs, make routes more efficient and to upgrade airplanes and other equipment.

It spent $7 billion on the project in 2018, when it opened four "super hubs" and built or revamped 18 other sorting facilities.

UPS will open two more "super hubs" and 18 other modernized sorting facilities this year. It plans to open them earlier than last year, when the addition of new hubs helped its performance during the holiday peak, and related charges will hit second-quarter results.

Peretz said UPS will see labor costs fall due to sorting facility automation and a voluntary buyout program last year. At the same time, it is adding higher-margin business-to-business shipments to balance out booming, but lower profit e-commerce shipments for retailers like Amazon.com and Walmart Inc.

(Reporting by Lisa Baertlein in Los Angeles and Ankit Ajmera in Bengaluru; Editing by Bernadette Baum)