By Lucia Mutikani WASHINGTON (Reuters) - The number of Americans filing applications for unemployment benefits increased less than expected last week, pointing to strong labor market conditions that should continue to support an economy growing at a moderate pace. The steady economic growth pace was also underscored by other data on Thursday showing home resales rising in August to a 17-month high. 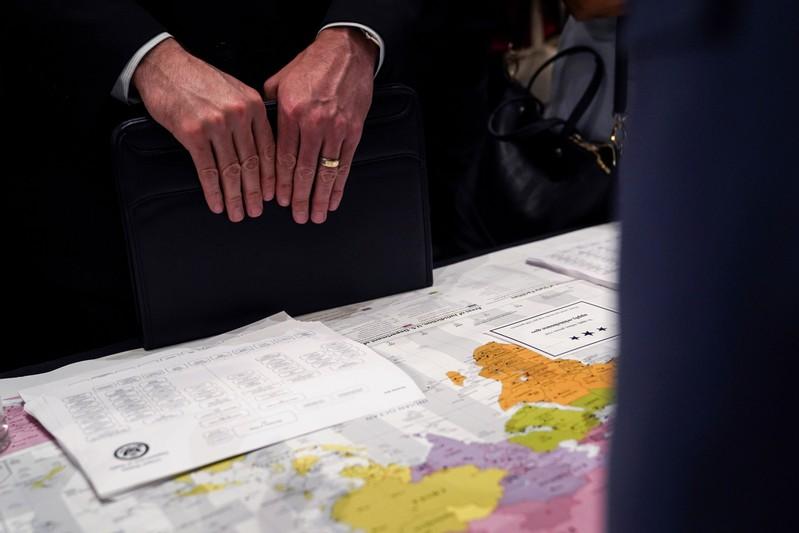 WASHINGTON (Reuters) - The number of Americans filing applications for unemployment benefits increased less than expected last week, pointing to strong labor market conditions that should continue to support an economy growing at a moderate pace.

The steady economic growth pace was also underscored by other data on Thursday showing home resales rising in August to a 17-month high. While factory activity in the mid-Atlantic region slowed in September, orders remained solid, leading manufacturers in the region to increase employment and boost hours for workers.

The reports suggested that housing and manufacturing, the two weak spots in the economy, were stabilizing. The Federal Reserve cut interest rates by another 25 basis points on Wednesday, citing risks to the longest economic expansion in history from a year-long U.S.-China trade war and slowing economic growth overseas.

Fed Chair Jerome Powell said he expected the economy, now in its 11th year of expansion, to continue to "expand at a moderate rate," but noted trade tensions were "weighing on U.S. investment and exports."

The U.S. central bank cut rates in July for the first time since 2008. The Fed offered mixed signals on further monetary policy easing. Data, including retail sales, so far in the third quarter suggest the economy is growing close to the April-June quarter's 2.0% annualized rate.

Financial markets have been flagging a recession. The Atlanta Fed is estimating gross domestic product rising at a 1.9% pace this quarter.

"Fed officials are done cutting interest rates for the rest of this year and one of the reasons for this is that the economic data continue to surprise us on the upside," said Chris Rupkey, chief economist at MUFG in New York.

Initial claims for state unemployment benefits rose 2,000 to a seasonally adjusted 208,000 for the week ended Sept. 14, the government said. Economists polled by Reuters had forecast claims increasing to 213,000 in the latest week.

Layoffs remain low despite the trade tensions, which have weighed on business investment and manufacturing. But there are concerns that slowing job growth could take some shine off robust consumer spending, which is largely driving the economy.

The economy created 130,000 jobs in August. Economists say it is unclear whether the loss of momentum in hiring is due to ebbing demand for labor or a shortage of qualified workers.

Job gains have averaged 158,000 per month this year, still above the roughly 100,000 per month needed to keep up with growth in the working age population and sustain a healthy pace of consumer spending.

"If there was a problem in the labor market it would be visible in initial claims and they are not raising any red flags," said Ryan Sweet, a senior economist at Moody's Analytics in West Chester, Pennsylvania. "Though business confidence has dropped noticeably this year, it hasn't led businesses to lay off workers yet."

The dollar fell against a basket of currencies, while prices for U.S. Treasuries rose. Stocks on Wall Street were trading higher, with Microsoft's planned share buy-back helping to push the benchmark S&P 500 within striking distance of its record high.

That was the second straight monthly gain in sales and confounded economists expectations for a 0.4% drop to 5.37 million units.

The increase in home resales, which make up about 90 percent of U.S. home sales, came on the heels of data on Wednesday showing housing starts and building permits surged to a more than 12-year high in August. The housing market, which hit a soft patch last year, is being lifted by lower mortgage rates.

But the sector is not yet out of the woods as builders continue to grapple with land and labor shortages, which have constrained their ability to construct more of the sought-after lower-priced homes.

"It appears that the housing market is gaining some momentum as autumn approaches," said Matthew Speakman, an economist at online real estate database company Zillow. "Even stronger sales volumes may be around the corner given that mortgage rates plummeted in August."

In a third report, the Philadelphia Fed said its business conditions index fell to a reading of 12.0 in September from 16.8 in August. The survey's measure of new orders dipped to 24.8 this month from 25.8.

Its measure of factory employment in the region that covers eastern Pennsylvania, southern New Jersey and Delaware jumped to a reading of 15.8 in September from 3.6 in the prior month. A gauge of the factory workweek increased to a reading of 13.0 from 6.8 in August.

Manufacturing, which makes up about 11% of the economy, has shouldered the brunt of the U.S.-China trade war. A measure of national manufacturing activity contracted in August for the first time in three years.

While factory surveys have remained weak, so-called hard data have suggested the manufacturing downturn could soon run its course. Manufacturing production rebounded 0.5% in August after falling 0.4% in July, the Fed reported on Tuesday.

"It is hard to explain the month-to-month changes in the different business surveys and the differences across the various measures, but with manufacturing output rising in recent months, some of the other surveys that have been weak may start to firm up and look more like the Philadelphia Fed survey," said Daniel Silver, an economist at JPMorgan in New York.

By Timothy Gardner WASHINGTON (Reuters) -The U.S. Senate Foreign Relations Committee advanced a bill on Wednesday to deliver aid to Ukraine in its struggle with Russia and pressure companies helping to build Russia's Nord Stream 2 gas pipeline that could deprive Kyiv of lucrative transit fees. The Ukraine Security Partnership Act https://www.foreign.senate.gov/imo/media/doc/S.%20-%20Ukraine%20Bill%20(as%20filed).pdf, which was approved by voice vote, authorizes $300 million in foreign military financing, of which $150 million would be subject to conditions

JERUSALEM (Reuters) - Sirens sounded in the southern Israeli district of Abu Qrenat near the Dimona nuclear reactor on Thursday, the Israeli military said without immediately providing further details. Such siren alerts are generally activated by rocket attacks. A Reuters reporter about 90 km (56 miles) away from Abu Qrenat heard the sound of an explosion minutes before the military's text message.