By David Shepardson WASHINGTON (Reuters) - The United Auto Workers union announced on Tuesday that it is endorsing Democrat Joe Biden for president in the 2020 election. U.S. President Donald Trump, a Republican, has heavily courted auto workers in key states like Michigan and Ohio, while Biden has touted his support for autoworkers when he served as vice president and his support of policies championed by unions. 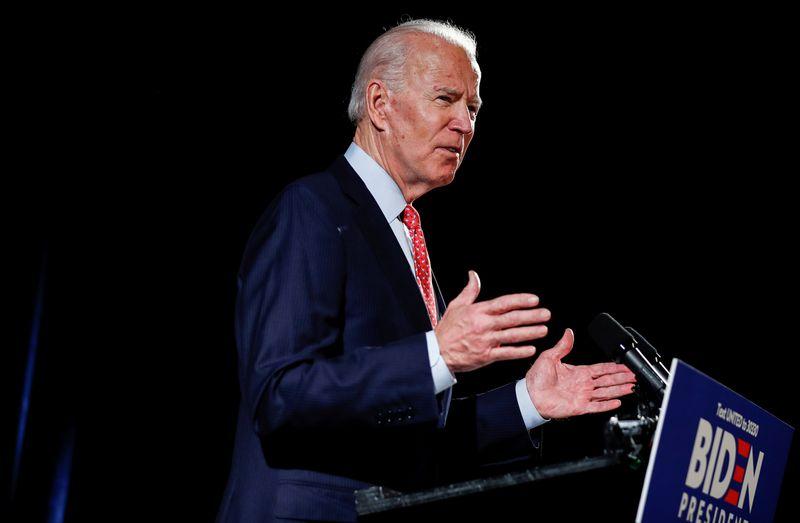 WASHINGTON (Reuters) - The United Auto Workers union announced on Tuesday that it is endorsing Democrat Joe Biden for president in the 2020 election.

U.S. President Donald Trump, a Republican, has heavily courted auto workers in key states like Michigan and Ohio, while Biden has touted his support for autoworkers when he served as vice president and his support of policies championed by unions.

"In these dangerous and difficult times, the country needs a president who will demonstrate clear, stable leadership, less partisan acrimony and more balance to the rights and protections of working Americans," UAW President Rory Gamble said in a statement.

On Monday, the UAW endorsed Biden's plan to reopen the U.S. economy closed to try to curb the spread of the coronavirus outbreak. The union, which represents about 400,000 U.S. workers, has been in talks with General Motors Co, Ford Motor Co and Fiat Chrysler Automobiles NV about when to reopen U.S. auto plants.

"This issue demonstrates the need for presidential leadership to follow the guidance of science and give workers a seat in discussions over their safety and well-being. Now it is time for workers to take their place at the table," Gamble said.

Trump last week named top executives at the Detroit Three automakers and AFL-CIO President Richard Trumka to advise the administration on reopening the economy, but did not include the UAW.

Trump defeated Democrat Hillary Clinton in Michigan in 2016 by just over 10,000 votes, or 0.23% points. Democrats in the state hope Biden will attract more blue-collar support in 2020.

The endorsement comes at an opportune time for Biden, who has struggled to maintain a high profile during the COVID-19 pandemic and sustain the momentum he had built up in his lightning-quick run toward becoming the Democratic nominee.

But the UAW also endorsed Clinton in 2016, proving that getting the nod from the union leadership doesn't automatically translate into support from the rank-and-file.

Many union members, in the UAW and elsewhere, broke with their leaders and voted for Trump four years ago, drawn to his protectionist message on trade.

The Trump campaign had no immediate comment on the UAW endorsement.